Articoli correlati a Villain of Steam: A Life of Dionysius Lardner (1793-1859) 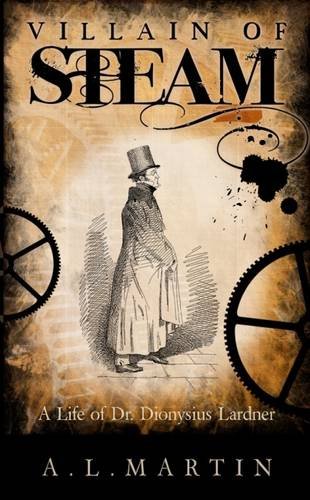 Steam, Science and the six shilling sciences: Dr Dionysius Lardner (1893-1859) was an expert in all three. One of the most famous men of his age, his multivolume encyclopaedias included volumes commissioned from Sir Walter Scott, Mary Shelley and John Herschel and were advertised and quoted in the press every month. He was celebrated in songs, poems and characatures and is even mentioned in Karl Marx s 'Das Kapital', but after eloping with a married woman he was expunged from history. Promoting the work of innovators such as Sir Rowland Hill and Charles Babbage, he both praised and criticized George Stephenson and Isambard Kingdom Brunel. His books and lectures inspired many, including mathematician Ada Lovelace, economist Stanley Jevons and a young Charles Darwin, to take up science as a profession. 'If you have not read Herschel in Lardners read it directly (Charles Darwin). 'Lardner s Museum of Science and Art is the best book I have ever read' (Australian explorer William John Wills). 'It is to Lardner s "Railway Economy" that I am principally indebted' (economist William Stanley Jevons). 'I myself should have nothing to do with him' (Charles Dickens).

It is astonishing to realise that this wonderful book is the first ever biography of Dionysius Lardner, whose scientific and cultural publications helped transform Victorian society as radically as the advent of Wikipedia transformed the lives of our generation. It is written throughout with a true affection for the hero , and more importantly, with an appreciation of the astonishing social and scientific/technological importance of the man. In her writing A L Martin bravely confronts, in an honest fashion. all the facets of Lardner who is a true conundrum. --Norman McMillan, Chairman, An Coiste Náisiúnta um Plaiceanna Cuimhneacháin Eolaíochta agus Teicneolaíochta / National Committee for Commemorative Plaques in Science and Technology.

A L Martin, author of 'Villain of Steam', studied history at Cambridge and works as a librarian. She plays the euphonium, is slightly bipolar and campaigns against stigma in mental health.