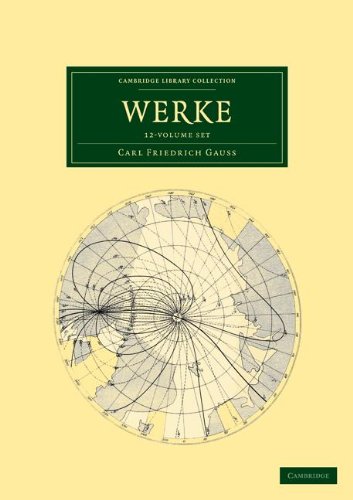 The genius of Carl Friedrich Gauss (1777–1855) and the novelty of his work (published in Latin, German, and occasionally French) in areas as diverse as number theory, probability and astronomy were already widely acknowledged during his lifetime. But it took another three generations of mathematicians to reveal the true extent of his output as they studied Gauss' extensive unpublished papers and his voluminous correspondence. This posthumous twelve-volume collection of Gauss' complete works, published between 1863 and 1933, marks the culmination of their efforts. Containing working notes and published treatises, geodesic survey data and astronomical observations, together with letters and reviews of work by Gauss' contemporaries, it provides a fascinating account of one of the great scientific minds of the nineteenth century.

From short notes to major treatises, this twelve-volume collection, published 1863–1933, contains the complete scientific works of the German mathematician, physicist and astronomer Carl Friedrich Gauss (1777–1855). As well as work in both Latin and German published during Gauss' lifetime, it contains a fascinating range of posthumous material.