Articoli correlati a The Poe Shadow 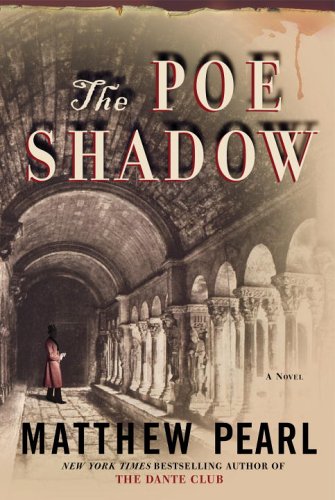 In 1849 Baltimore, following the death of Edgar Allan Poe, Quentin Clark, a young city dweller fiercely loyal to his favorite author, discovers that Poe's final days had been marked by a series of bizarre, unanswered questions and, inspired by Poe's fictional detective C. Auguste Dupin, launches his own investigation to resolve the mystery of Poe's death. 70,000 first printing.

Matthew Pearl is the New York Times bestselling author of The Dante Club and the editor of the Modern Library editions of Dante’s Inferno (translated by Henry Wadsworth Longfellow) and Edgar Allan Poe’s The Murders in the Rue Morgue: The Dupin Tales. The Dante Club has been published in more than thirty languages and forty countries around the world. Pearl is a graduate of Harvard University and Yale Law School and has taught literature at Harvard and at Emerson College. He lives in Cambridge, Massachusetts. He can be reached via his website, www.matthewpearl.com.

I remember the day it began because I was impatient for an important letter to arrive. Also, because it was meant to be the day of my engagement to Hattie Blum. And, of course, it was the day I saw him dead.

The Blums were near neighbors of my family. Hattie was the youngest and most affable of four sisters who were considered nearly the prettiest four sisters in Baltimore. Hattie and I had been acquainted from our very infancies, as we were told often enough through the years. And each time we were told how long we'd known each other, I think the words were meant also to say, "and you shall know each other evermore, depend upon it."

And in spite of such pressure as might easily have pushed us apart, even at eleven years old I became like a little husband toward my playfellow. I never made outward professions of love to Hattie, but I devoted myself to her happiness in small ways while she entertained me with her talk. There was something hushed about her voice, which often sounded to me like a lullaby.

My own nature while in society as it developed was markedly quiet and tranquil, to the degree that I was often asked at any given moment if I had only just then been stirred awake. In quieter company, though, I had the habit of turning unaccountably loquacious and even rambling in my speech. Therefore, I savored the stretches of Hattie's animated conversation. I believe I depended upon them. I felt no need to call attention to myself when I was with her; I felt happy and modest and, above all, easy.

Now, I should note that I did not know that I was expected to propose marriage on the afternoon with which we begin this narration. I was on my way to the post office from the nearby chambers of our law practice when I crossed paths with a woman of good Baltimore society, Mrs. Blum--Hattie's aunt. She pointed out immediately that the errands of retrieving waiting mail should be assigned to one of my lesser and less occupied legal clerks.

"You are a specimen, aren't you, Quentin Clark!" Mrs. Blum said. "You wander the streets when you are working, and when you're not working, you have a look upon your face as though you were!"

She was your genuine Baltimorean; she suffered no man without proper commercial interests any more than she would tolerate a girl who was not beautiful.

This was Baltimore, and whether in fine weather or in this day's fog it was a very red-brick type of place, where the movements of the people on well-paved streets and marble steps were quick and boisterous but without gaiety. There was not much of that last quality in supply in our go-ahead city, where large houses stood elevated over a crowded trading bay. Coffee and sugar came in from South America and the West India Islands on great clipper ships, and the barrels of oysters and family flour moved out on the multiplying railway tracks toward Philadelphia and Washington. Nobody looked poor then in Baltimore, even those who were, and every other awning seemed to be a daguerreotype establishment ready to record that fact for posterity.

Mrs. Blum on this occasion smiled and took my arm as we walked through the thoroughfare. "Well, everything is quite perfectly arranged for this evening."

"This evening," I replied, trying to guess what she could be referring to. Peter Stuart, my law partner, had mentioned a supper party at the home of a mutual acquaintance. I had been thinking so much of the letter I anticipated retrieving, I had until then forgotten completely. "This evening, of course, Mrs. Blum! How I've looked forward to it."

"Do you know," she continued, "do you know, Mr. Clark, that only yesterday I heard dear Miss Hattie spoken of on Market Street"--this generation of Baltimoreans still called Baltimore Street by its former name--"yes, talked about as the loveliest unmarried beauty in all Baltimore!"

"One could argue the loveliest above all, married or not," I said.

I had trouble hearing what she said next because a loud rumble of two carriages grew behind us. "If it is a hackney approaching," I thought to myself, "I shall put her into it, and offer double the fare." But as they passed I could see both were private carriages, and the one in front was a sleek, shiny hearse. Its horses kept their heads low, as if in deference to the honorable cargo.

No one else turned to look.

Leaving behind my walking companion with a parting promise of seeing her at the evening's gathering, I found myself crossing the next avenue. A herd of swine swarmed past with belligerent shrieks, and my detour ran along Greene Street and across to Fayette, where hearse and mourning-carriage were parked together.

In a quiet burial ground there, a ceremony began and ended abruptly. I strained through the fog at the figures in attendance. It was like standing in a dream--everything blurred into silhouettes, and I swallowed down the vague feeling that I should not be there. The minister's oration sounded muffled from where I stood at the gates. The small gathering, I suppose, did not demand much effort from his voice.

It was the saddest funeral ever seen.

It was the weather. No: the mere four or five men in attendance--the minimum needed to lift an adult coffin. Or perhaps the melancholy quality came chiefly from that brisk, callous completion of the ceremony. Not even the most impoverished pauper's funeral that I had observed before this day, nor the funerals of the poor Jewish cemetery nearby, not even those exhibited such unchristian indifference. There wasn't one flower, wasn't one tear.

Afterward, I retraced my steps only to find the post office had bolted its doors. I could not know whether there was a letter waiting for me inside or not--but I returned to our office chambers and reassured myself. Soon, I'd hear more from him soon.

That evening at the social gathering, I found myself on a private stroll with Hattie Blum along a field of berries, dormant for the season but shadowed with summer remembrances of Champagne and Strawberry Parties. As ever, I could speak comfortably to Hattie.

"Our practice is awfully interesting at times," I said. "Yet I think I should like to choose the cases with more discrimination. A lawyer in ancient Rome, you know, swore never to defend a cause unless he thought it was just. We take cases if their pay is just."

"You can change your office, Quentin. It is your name and your character hanging on the shingle too, after all. Make it more like yourself, rather than make yourself more suited to it."

"Do you believe so, Miss Hattie?"

Twilight was settling and Hattie became uncharacteristically quiet, which I fear meant that I became insufferably talkative. I examined her expression but found no clues to the source of her distant bearing.

"You laughed for me," Hattie said absently, almost as though I would not hear her.

She looked up at me. "I was only thinking of when we were children. Do you know at first I thought you were a fool?"

"My father would take my mother away during her different sicknesses, and you would come to play when my aunt was minding me. You were the only one to know just how to make me smile until my parents returned, because you were always laughing at the strangest things!" She said this wistfully, while lifting the bottom of her long skirts to avoid the muddy ground.

Later, when we were inside warming ourselves, Hattie talked quietly with her aunt, whose entire countenance had stiffened from earlier in the day. Auntie Blum asked what should be arranged for Hattie's birthday.

"It is coming, I suppose," Hattie said. "I should hardly think of it, typically, Auntie. But this year . . ." She trailed off into a cheerless hum. At supper, she hardly touched the food.

I did not like this at all. I felt myself turn into an eleven-year-old boy again, an anxious protector of the girl across the way. Hattie had been such a reliable presence in my life that any discomfort on her part upset me. Thus it was perhaps from a selfish motivation I tried to cure her mood, but at all events I did wish her to be genuinely happy.

Others of the party, like my law partner, Peter, joined in attempting to raise her spirits, and I studied each of them vigilantly in the event that one of them had been responsible for bringing Hattie Blum into a fit of blues.

Something was hindering my own role in cheering her on this day: that funeral I had seen. I cannot properly explain why, but it had thoroughly exploded my peace. I tried to call to mind a picture of it again. There had been only the four men in attendance to listen to the minister. One, taller than the others, stood toward the rear, his gaze floating off, as though the most anxious of all to be somewhere else. Then, as they came toward the road, there were their grim mouths. The faces were not known to me but also not forgotten. Only one member delayed, staying his steps regretfully, as though overhearing my private thoughts. The event seemed to speak of a terrible loss and yet to do it no honor. It was, in a word, Wrong.

Under this vague cloud of distraction, my efforts exhausted themselves without rescuing Hattie's spirits. I could only bow and exp...

Descrizione libro Random House, 2006. Hardcover. Condizione: New. Condizione sovraccoperta: New. 1st Edition. 2006. Hardcover. First ed. First Printing. (Complete Number line with the "1" present.) Poe has just been buried and the world has written him off as a 3rd rate writer who died in disgrace. But there are those who are fighting to save Poe's reputation, but maybe they're not ready for who and what they're fighting against. Mint in Mint DJ. tv. Codice articolo 10603

Descrizione libro Hardcover. Condizione: New. Quality Books. Because We Care - Shipped from Canada. Usually ships within 1-2 business days. If you buy this book from us, we will donate a book to a local school. We donate 10,000+ books to local schools every year. If there are any problems, pleases ask us to resolve it amicably before leaving any feedback. Codice articolo R27892S