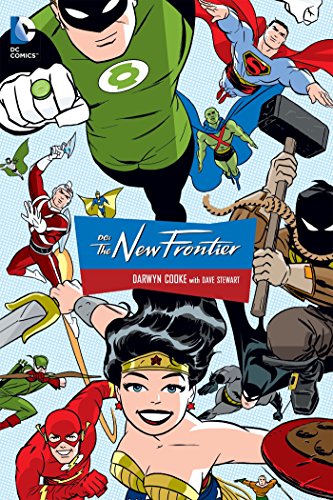 Welcome to the DC Universe in 1950s America — a land of promise and paranoia, of glittering cities and segregated slums, of dizzying scientific progress and simmering Cold War conflict. A land without the Justice League—Superman, Batman and Wonder Woman. Or so it seems.

The masked mystery men who fought for freedom in the Second World War have been outlawed. The soldiers and spies who conducted top-secret missions into the unknown now work in the shadows. And those icons who do still fight on — Superman, Wonder Woman, Batman — operate under hidden agendas and dueling ideologies.

Yet this America needs its heroes more than ever. With darkness gathering on the horizon once more, only a bold new generation of adventurers — young, daring, and dedicated to the better angels of our nature — is equal to the challenge of the New Frontier.

From Eisner Award–winning writer-artist Darwyn Cooke and Eisner Award-winning colorist Dave Stewart comes DC: THE NEW FRONTIER — a timeless tale of idealism that has become one of the most acclaimed superhero comics of the 21st century. This edition collects the original 6-issue miniseries together with the JUSTICE LEAGUE: THE NEW FRONTIER SPECIAL, and features over 50 pages of designs, sketches and preliminary artwork from the author.

"[NEW FRONTIER] chronicles the experiences of DC Comics heroes from the end of World War II through the Cold War. Mr. Cooke's drawings are striking, and his plot makes good use of DC's diverse characters, from the alien Martian Manhunter to the military squadron known as the Losers." --THE NEW YORK TIMES
"A project composed from equal parts affection and ambition, Darwyn Cooke's episodic miniseries DC: THE NEW FRONTIER looks back to the Silver Age of DC comic-book heroes, finding in them all the elements needed for a commentary on post-war America. Employing an art style that pays homage to the era's giants while remaining unmistakably his own, Cooke uses Superman, The Flash, Batman, and just as often, more obscure heroes like The Losers and Challengers of the Unknown to examine space-age optimism, Cold War paranoia, and the places where the two meet." --THE ONION A.V. CLUB

"Composed from equal parts affection and ambition, Darwyn Cooke's DC: THE NEW FRONTIER looks back to the Silver Age of DC comic-book heroes, finding in them all the elements needed for a commentary on post-war America. Using a classic style, Cooke creates a classic of his own."
-- A.V. Club/The Onion

"Mr. Cooke's drawings are striking, and his plot makes good use of DC's diverse characters."
-- The New York Times "You need to drop what you're doing and go read NEW FRONTIER. Now."
-- IGN "Cooke has stirringly laid out a promising new path for the superhero genre."
-- Publishers Weekly "DC: THE NEW FRONTIER blew me away."
-- Scripps Howard News Service "Grade: A+"
--Cinescape.com L'autore:

Darwyn Cooke is an Eisner Award-winning cartoonist and animator. After spending several years as a magazine art director and graphic designer, Cooke switched careers and began working in animation, where he contributed to such shows as Batman: The Animated Series, Superman: The Animated Series and Men In Black: The Series. From there, DC Comics approached Cooke to write and illustrate a project that the artist had submitted to the company years earlier: BATMAN: EGO. The critical success of the title led to more freelance work, including the relaunch of the CATWOMAN series with writer Ed Brubaker (which inspired Cooke to write and draw the graphic novel CATWOMAN: SELINA'S BIG SCORE).

Cooke then spent several years writing and drawing the ambitious epic THE NEW FRONTIER, a six-issue miniseries bridging the gap between the end of the Golden Age of comics and the beginnings of the Silver Age. He is the writer/artist of BEFORE WATCHMEN: MINUTEMEN and co-writer of BEFORE WATCHMEN: SILK SPECTRE. Currently he is working on a series of best-selling graphic novel adaptations of Richard Stark's hard-boiled Parker crime series.