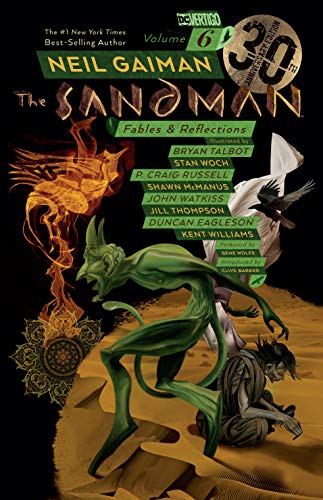 The Sandman Vol. 6: Fables & Reflections 30th Anniversary Edition follows the Lord of the Dreaming on a winding journey through time and space as he touches the lives of nine remarkable dreamers. In these haunting tales, kings and spies, emperors and actors, ravens and werewolves all share their secret stories--dreams of life and love, power and darkness.

One of the most popular and critically acclaimed graphic novels of all time, Neil Gaiman's award-winning masterpiece The Sandman set the standard for mature, lyrical fantasy in the modern comics era. Illustrated by an exemplary selection of the medium's most gifted artists, the series is a rich blend of modern and ancient mythology in which contemporary fiction, historical drama and legend are seamlessly interwoven.

"The greatest epic in the history of comic books." --The Los Angeles Times Magazine

"One of the few comics that segued from the comics crowd, entering the intellectual and art worlds, winning over a large non-comics-reading audience..." --The Hollywood Reporter "The Sandman is a modern myth, as well as a precis on why the stories we tell matter so much." --Playboy "The landmark comic-book series that actually made Death seem ... cool." --Entertainment Weekly L'autore:

Creator of The Sandman and one of comics' most accomplished writers, Neil Gaiman is also the New York Times best-selling author of the novels Anansi Boys, American Gods, Stardust and Coraline, as well as the short story collections M Is for Magic and Smoke and Mirrors and the multimedia creation Neverwhere. He also co-wrote the Jim Henson Productions film MirrorMask with longtime collaborator Dave McKean, illustrator of the Gaiman-written graphic novels Mr. Punch, Violent Cases and Black Orchid. Among his many awards are the Hugo, the Nebula, the Eisner, the Harvey, the Bram Stoker and the World Fantasy Award. Originally from England, Gaiman now lives in the United States.

Descrizione libro Paperback. Condizione: New. Russell, P. Craig (illustratore). 30th Anniversary Edition. Language: English. Brand new Book. The critically acclaimed The Sandman: Fables and Reflections continues the fantastical epic of Morpheus, the King of Dreams, as he observes and interacts with an odd assortment of historical and fictional characters throughout time. Featuring tales of kings, explorers, spies, and werewolves, this book of myth and imagination delves into the dark dreams of Augustus Caesar, Marco Polo, Cain and Abel, Norton I, and Orpheus to illustrate the effects that these subconscious musings have had on the course of history and mankind. Collects The Sandman #29-31, #38-40, #50 and Sandman: Special #1. Codice articolo ABZ9781401288464