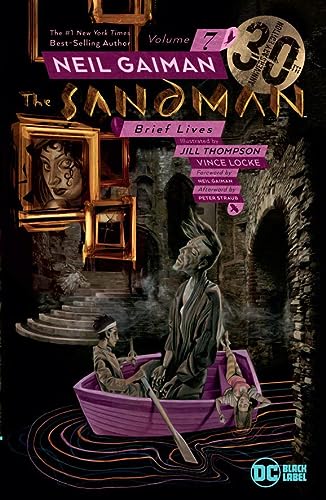 One of the most popular and critically acclaimed graphic novels of all time, Neil Gaiman's award-winning masterpiece The Sandman set the standard for mature, lyrical fantasy in the modern comics era. Illustrated by an exemplary selection of the medium's most gifted artists, the series is a rich blend of modern and ancient mythology in which contemporary fiction, historical drama and legend are seamlessly interwoven.

In Brief Lives, Delirium, youngest of the extended family known as the Endless, prevails upon her brother Dream to help find their missing sibling, Destruction. Their subsequent odyssey through the waking world, and their final confrontation with Destruction--as well as the resolution of Dream's painful relationship with his son, Orpheus--will change the Endless forever.

"The greatest epic in the history of comic books." --The Los Angeles Times Magazine

"One of the few comics that segued from the comics crowd, entering the intellectual and art worlds, winning over a large non-comics-reading audience..." --The Hollywood Reporter "The Sandman is a modern myth, as well as a precis on why the stories we tell matter so much." --Playboy "The landmark comic-book series that actually made Death seem ... cool." --Entertainment Weekly L'autore:

Neil Gaiman is the New York Times bestselling author of the Newbery Medal-winning The Graveyard Book and Coraline, the basis for the hit movie. His other books include Anansi Boys, Neverwhere, American Gods, and Stardust, (winner of the American Library Association's Alex Award as one of 2000's top novels for young adults) as well as the short story collections M Is for Magic and Smoke and Mirrors. He is also the author of The Wolves in the Walls and The Day I Traded My Dad for Two Goldfish, both written for children. Among his many awards are the Eisner, the Hugo, the Nebula, the World Fantasy, and the Bram Stoker. Originally from England, he now lives in the United States.

Jill Thompson is a writer, illustrator, and comic book artist. Her Scary Godmother tales have been featured in graphic novels, comics, a play, and two animated holiday specials seen on the Cartoon Network, and she has published three volumes in her Magic Trixie series of children's books from HarperCollins. Her comics work includes a celebrated run on Neil Gaiman's The Sandman, several related works set within the world of the Dreaming (including Death: At Death's Door, The Dead Boy Detectives and Delirium's Party: A Little Endless Storybook), and, most recently, the adventures of the Beasts of Burden, co-created with writer Evan Dorkin.

Descrizione libro Paperback. Condizione: New. Thompson, Jill (illustratore). Anniversary. Language: English. Brand new Book. Older and more powerful than the gods themselves, the Endless are a dysfunctional family of cosmic beings that have ruled over the realms of dream, desire, despair, destiny, destruction, death, and delirium since the beginning of time. But three hundred years ago, one of the mythical beings gave up his duties and left his realm, never to be seen again. Now on a mission to find their missing sibling, Delirium and older brother Dream encounter immortal humans and various deities as they try to locate the prodigal Destruction. But as their adventure draws Dream into a final, tragic confrontation with his son Orpheus, the eternal being learns the true meaning of fate and consequences. Collects The Sandman #41-49. Codice articolo BZV9781401289089

Descrizione libro Trade Paperback. Condizione: New. Thompson, Jill (illustratore). Firefly sells new and used books through our store front. We try to add a detailed description to as many titles as possible. If you have questions regarding this title, please contact us. Photos available on request. Codice articolo 264721