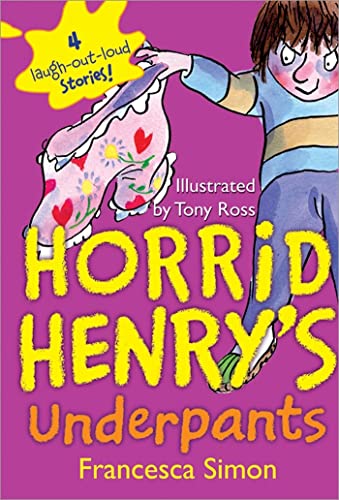 DISCOVER THE SERIES BOYS AND GIRLS AROUND THE WORLD LOVE TO READ!

Horrid Henry makes a deal with his parents in return for eating his veggies; accidentally wears girls' underwear to school; tries to prove he is sicker than his brother; and writes the meanest thank-you cards ever (and makes money on it too).

Francesca Simon is one of the world's best-loved children's authors. She is the only American to have ever won the Galaxy Book Award, and her creation, Horrid Henry, is the #1 bestselling chapter book series in the UK?with a hit TV show and over fifteen million copies sold! Each book contains four easy-to-read stories and hilarious illustrations by the one and only Tony Ross, so even the most reluctant of readers won't be able to resist Henry's amazing talent for trouble!

Francesca Simon was born in the United States and attended both Yale and Oxford universities. For ten years she worked as a freelance journalist. She now writes full time and has had many books published, including the bestselling Horrid Henry series and several picture books. She lives in North London, England, with her husband, Martin, and her son, Josh.

Tony Ross is a prolific illustrator of books for children, including Francesca Simon's Horrid Henry series, Martyn Beardsley's Sir Gadabout stories, and, of course, as his own stories. Tony has become one of the best-known creators of original and traditional picture books and his work has been sold all over the world.