Articoli correlati a Dutch Culture In A European Perspective: 4

Dutch Culture In A European Perspective: 4

Dutch Culture In A European Perspective: 4 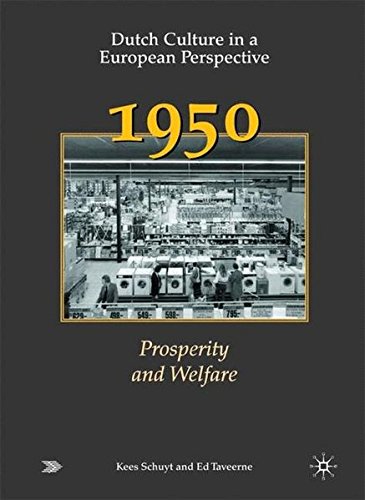 In the two decades after World War Two the structure of political life and social conditions in the Netherlands changed dramatically. There was a remarkable effort to restore the economy and bring prosperity to a population which had suffered deeply from the German occupation. With this came an increasing emancipation from the structures dominated by religion, a gradual breakdown of denominational segregation. This book examines the influence of immigration, postmodernity, and globalization on Dutch society during this crucial period.

KEES SCHUYT is Professor of Sociology at the University of Amsterdam, the Netherlands.

ED TAVERNE is Professor Emeritus of Architecture and Town Planning at the University of Groningen, the Netherlands.

Preface
Introduction
Paradise of Infinite Economic Growth
American Sounds
The Myth Behind the Plan
The Pace of Technology
An Empty Country
Urbanization and Urban Life
Prosperity and Housing
Population Growth
Community and Authority in the 1950s
Prosperity for Families
The Expanding Welfare State
Towards Equal Opportunities in Education
Quality and Frugality in Scientific Research
Secularization and Depillarization
Rebellion in the 1960s
'Behind the Sea Walls': The Arts in the Netherlands
Literary Life
Progressive Liberation in Image and Colour
Those were the Days

1. Dutch Culture in a European Perspective 4: 1900: Prosperity and Welfare