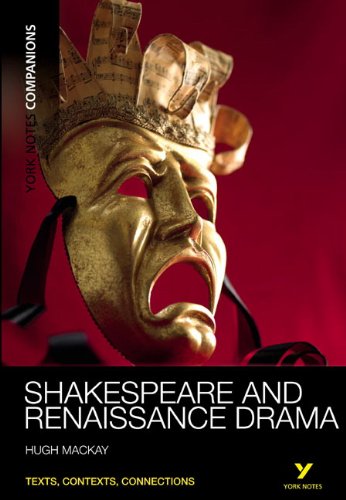 This companion brings Renaissance drama to life by considering such classic plays asHamlet, Othello and Dr Faustus from the perspective of contemporary theatre-goers.

Discussions of Shakespeares masterpieces are accompanied by examinations of the work of lesser known playwrights and commentators, while chapters on Madness and Subjectivity, Rhetoric and Performance and Nation-Building provide a variety of key critical perspectives.

Dr Hugh Mackay completed his Phd on early Jacobean drama in 2003 at the University of Southampton, under the supervision of Professor Kathleen McLuskie, Director of the Shakespeare Institute. From 2002 to 2007 he taught various undergraduate courses at Southampton, ranging from Literature and History, Shakespeares Histories and Comedies to Critical History and Marxism and Psychoanalysis. He has a paper onLusts Dominion and the Readmission of the Jews, published in the Review of English Studies, and has co-organised and presented at several conferences.

The York Notes Companion to Shakespeare and Renaissance Drama brings widely studied plays such asHamlet, Othello and Dr Faustus to life for students, by considering them from the perspective of contemporary theatre-goers. Placing Shakespeares masterpieces in the social and historical contexts of the period and examining them alongside the work of his lesser known contemporaries, the Companion provides detailed commentaries on a range of plays, and guides students through key literary theories and debates.  Connecting texts with their scholarly and historical contexts, this is essential reading for any student of Renaissance drama.

Hugh Mackay has a PhD in early Jacobean drama from the University of Southampton, where he has taught on a range of undergraduate courses.

Descrizione libro 2010. Paperback. Condizione: New. 1. Paperback. Discussions of Shakespeares classic play. This York Notes Companion brings Renaissance drama to life by considering such classic plays as Hamlet, Othello and Dr Faustus from t.Shipping may be from our Sydney, NSW warehouse or from our UK or US warehouse, depending on stock availability. 360 pages. 0.456. Codice articolo 9781408204801