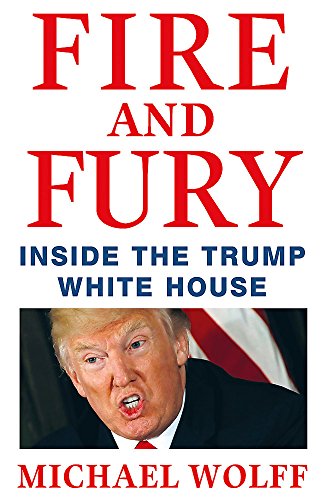 With extraordinary access to the Trump White House, Michael Wolff tells the inside story of the most controversial presidency of our time.

The first nine months of Donald Trump's term were stormy, outrageous - and absolutely mesmerising. Now, thanks to his deep access to the West Wing, bestselling author Michael Wolff tells the riveting story of how Trump launched a tenure as volatile and fiery as the man himself.

In this explosive book, Wolff provides a wealth of new details about the chaos in the Oval Office. Among the revelations:

- What President Trump's staff really thinks of him
- What inspired Trump to claim he was wire-tapped by President Obama
- Why FBI director James Comey was really fired
- Why chief strategist Steve Bannon and Trump's son-in-law Jared Kushner couldn't be in the same room
- Who is really directing the Trump administration's strategy in the wake of Bannon's firing
- What the secret to communicating with Trump is
- What the Trump administration has in common with the movie The Producers
Never before has a presidency so divided the American people. Brilliantly reported and astoundingly fresh, Michael Wolff's Fire and Fury shows us how and why Donald Trump has become the king of discord and disunion.

[A] brilliant book . . . that promises to do for the Trump presidency what Andrew Morton's 1992 biography of Princess Diana did for the Royal Family (Dominic Midgley Daily Express)

It's difficult to recall the last time any publication has had as big an impact on the news cycle as Fire and Fury, journalist Michael Wolff account of a year inside the Trump White House. It is horrifying, hilarious and hugely readable (Tim Walker Independent i)

[A] devastating expose of the Trump White House . . . it brings it all together in one riveting narrative, with the truth coming directly sourced from the president's own mortified advisers. The emperor's clothes were falling down but now they have vanished (Andrew Sullivan Sunday Times)

An unforgettable revelation of the monstrous oddity that is Trump. No one has so vividly captured this "enigma, cipher, disruptor", who didn't want to be president and was horrified to find himself landed with the job. Whatever may become of Trump, this is a book that will endure as a picture of one of the defining figures of our age (John Gray New Statesman)

The wildest of wild rides, this remains the quintessential book on the Trump presidency. It is hugely enjoyable (The Times)

With extraordinary access to the Trump White House, Michael Wolff tells the inside story of the most controversial presidency of our time

Descrizione libro Henry Holt and Co., 2018. Hardcover. Condizione: New. 1st Edition. Hardcover. SUNDAY TIMES NUMBER ONE BESTSELLERNEW YORK TIMES NUMBER ONE BESTSELLERWith extraordinary access to the Trump White House, Michael Wolff tells the inside story of the most controversial pre.Shipping may be from multiple locations in the US or from the UK, depending on stock availability. 336 pages. 0.574. Codice articolo 9781408711408

10. FIRE AND FURY: Inside the Trump White House