Articoli correlati a Alex Through the Looking-Glass: How Life Reflects Numbers,...

Alex Through the Looking-Glass: How Life Reflects Numbers, and Numbers Reflect Life 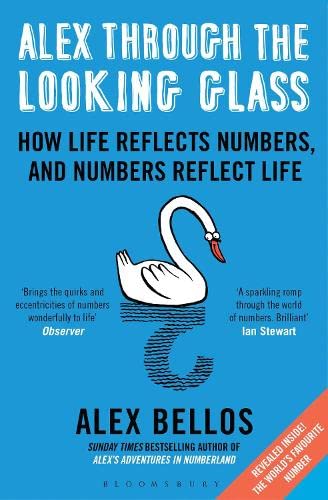 From triangles, rotations and power laws, to fractals, cones and curves, bestselling author Alex Bellos takes you on a journey of mathematical discovery with his signature wit, engaging stories and limitless enthusiasm. As he narrates a series of eye-opening encounters with lively personalities all over the world, Alex demonstrates how numbers have come to be our friends, are fascinating and extremely accessible, and how they have changed our world.

He turns even the dreaded calculus into an easy-to-grasp mathematical exposition, and sifts through over 30,000 survey submissions to reveal the world's favourite number. In Germany, he meets the engineer who designed the first roller-coaster loop, whilst in India he joins the world's highly numerate community at the International Congress of Mathematicians. He explores the wonders behind the Game of Life program, and explains mathematical logic, growth and negative numbers. Stateside, he hangs out with a private detective in Oregon and meets the mathematician who looks for universes from his garage in Illinois.

Read this captivating book, and you won't realise that you're learning about complex concepts. Alex will get you hooked on maths as he delves deep into humankind's turbulent relationship with numbers, and proves just how much fun we can have with them.

See, numbers don't have to be scary (Evan Davis)

Another sparkling romp through the world of numbers, with the inimitable Alex Bellos as your friendly, informed, and crystal-clear guide. A brilliant successor to Alex in Numberland (Ian Stewart)

To read Alex Through the Looking-Glass is to have one's mind quietly but continually blown with the knowledge that the world, so seemingly complex, is constantly conforming to patterns ... Bright children, bored with the way maths is presented, will find plenty here to jolly up their calculus classes, while those with an in-depth mathematical education may still find new gems (Sunday Express)

Alex Bellos brings the quirks and eccentricities of numbers wonderfully to life ... Each chapter has its fair share of intriguing stories, which are always followed by plenty of equations and detailed explanations. In many ways, Bellos's books remind me of the writing of Martin Gardiner, who was one of the most prolific recreational mathematicians of the 20th century and who died in 2010 (Simon Singh, Observer)

The great moments in maths, it seems, are not contemplations of chilly glories, but small, satisfying discoveries, like getting a particularly clever cryptic crossword clue, it is this friendly approach to numbers that makes Bellos so approachable; he has a way of walking the reader through a problem ... If anything, Looking Glass is a better work than Numberland - it feels more immediate, more relevant and fun (Daily Telegraph)

1. Alex Through the Looking-Glass

2. Alex Through the Looking-Glass

3. Alex Through the Looking Glass: How Life Reflects Numbers and Numbers Reflect Life