Articoli correlati a A Tap on the Window

Barclay, Linwood A Tap on the Window

A Tap on the Window 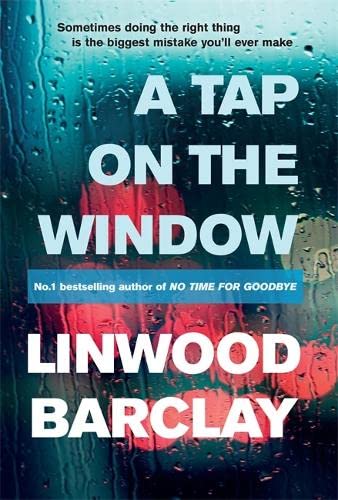 When Cal Weaver stops at red light on a rainy night while driving home, he ignores the bedraggled-looking teenaged girl trying to hitch a lift. Even when she starts tapping on his window. But when she says, 'Hey, aren't you Scott's dad?' and he realizes she's one of his son's classmates, he can't really ignore her. OK, so giving a ride to a teenage girl might not be the smartest move, but how much harm could it do?

Over the next 24 hours Cal is about to find out. When the girl, Claire, asks to stop at a restroom on the way home, he's happy to oblige. But the girl who gets back in the car seems strangely nervous, and it's only when they get nearer their destination that Cal realizes she no longer has the nasty cut that he noticed on Claire's hand. After he's finally let her out of the car he remains puzzled and intrigued. But it's only the next morning that he starts to really worry. That's when the police cruiser turns up at his door and asks him if he gave a lift to a girl the previous night. A girl who has now been found brutally murdered.

If Cal is going to clear his name he's going to have to figure out what Claire was really up to and what part he played in her curious deception. But doing so will involve him in some of the small town of Griffon's most carefully kept secrets - and a conspiracy as bizarre as it is deadly.

[A] killer of a thriller (NEW YORK TIMES)

Sure-fire and highly adroit storytellers as Barclay, whose speciality is to take ordinary people and to gradually dismantle all the meaningful elements in their lives ... This is Barclay firing on all cylinders (FINANCIAL TIMES)

Linwood Barclay, the current king of the multi-twisted plot, returns for another fast-but-thoughtful thriller ... believable characters and unbelievable twists - it's a winning combination. (MORNING STAR)

Barclay specialises in tales of things going badly awry in the midst of peaceful suburbia ... what lingers is Barclay's portrayal of the American dream turning sour. (MAIL ON SUNDAY EVENT MAGAZINE)

On a rainy night, a man gives a teenage girl a lift home, but the girl he picks up isn't the same one he drops off. Bestseller Linwood Barclay hooks the reader from page one with this suspense masterpiece

Descrizione libro Orion, 2013. Hardcover. Condizione: New. Condizione sovraccoperta: New. 1st Edition. Linwood Barclay A Tap on the Window 1st 1st Signed NEW book is signed to the title page and not via a book plate paypal accepted will be sent boxed and via a signed for method of postage. Signed by Author(s). Codice articolo ABE-1569393773675

Descrizione libro ORION BOOKS, 2013. Hardcover. Condizione: New. Condizione sovraccoperta: New. 1st Edition. Brand new and unread first UK edition hardback with an unclipped dustwrapper published in 2013 by Orion Books in fine condition with a little pushing to the bottom of the spine on the casing and some minimal creasing to parts of the bottom edge of the dustwrapper. A really nice copy. The book is signed on the title page by Linwood Barclay which was following his joint event with Ian Rankin at the Cheltenham Literature Festival on Friday 11th October 2013.We are including the event ticket which can be seen in the photograph, this is not signed. The first edition status of the book is confirmed by the numeric sequence 1 3 5 7 9 10 8 6 4 2 on the copyright page. Signed by Author(s). Codice articolo ABE-12493457296