Articoli correlati a Pietro Aretino: Subverting the System in Renaissance... 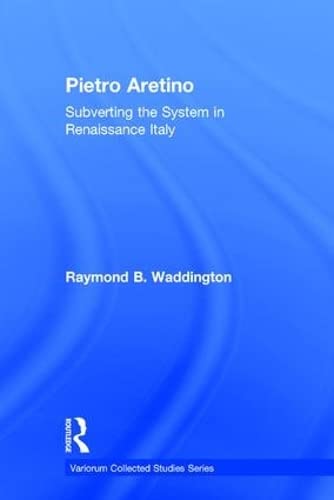 The essays gathered together in this volume follow the career of the sixteenth-century courtier-poet Pietro Aretino. Part One introduces the author during the 1520s in Rome with his remarkable first comedy, La Cortigiana. With Aretino’s move to Venice (1527), he found a congenial life-long home in which he could flourish. Yet the transition from courtier poet to poligrafo, vernacular writer for the popular press, was slow and difficult before he adopted a new career model derived from Erasmus; even then, he contemplated abandoning Italy for the Ottoman Empire. Part Two examines his work as a satirist in the mid-thirties with the Ragionamenti, the dialogues that branded him a pornographer when the satiric targets lost their immediacy. He augmented the satiric writings by creating the visual persona of a satirist in various media - woodcut author portraits in books, engravings, and particularly portrait medals. The complementary, verbal-visual relationship is the subject of this pairing. Aretino’s religious writings have not been taken seriously until quite recently. The two essays presented here trace Aretino’s associations with Erasmians, spirituali, heretics, and apostates, arguing that his own convictions were sincere, suggesting that he became a Nicodemite during the gathering Counter-Reformation repression of the 1540s. The concluding essays consider two examples of Aretino’s continuing influence in different media, visual arts and literature: on the brilliant, eccentric artist, Giuseppe Arcimboldo, and on a great English comedy, Ben Jonson’s Volpone.

Raymond B. Waddington is Professor Emeritus of English at the University of California, Davis, USA.