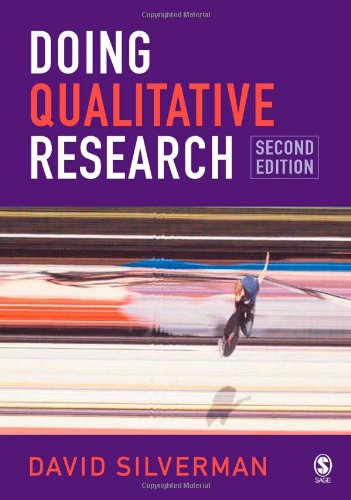 'Doing Qualitative Research has been the single most useful text in my academic learning and now my teaching. Barely a working day goes by without me drawing on one of [Silverman's] many practical pointers or examples of sound practice' - Dr Bridget Hamilton, University of Melbourne David Silverman's seminal Doing Qualitative Research can justifiably claim to be `the supervisor in your pocket' for all PhD and Masters students embarking on their own qualitative research project. This hugely popular textbook has been fully revised and updated and is one of the few books available that can claim to be essential reading for anyone planning their own research project. Written in a lively, accessible style, this step-by-step guide provides answers to all the questions students ask when beginning their first research project. Silverman demonstrates how to learn the craft of qualitative research by applying knowledge about different methods to actual data. He provides practical advice on key issues, such as: defining `originality' and narrowing down a topic; keeping a research diary and writing a research report; and presenting research to different audiences. Features of Doing Qualitative Research: Second Edition include: - six new chapters - case studies of students' own experiential accounts of doing research - essential guidance on practical issues such as working with your supervisor or writing up your research - end-of-chapter 'researcher's checklists' - a range of examples from across the full range of social science disciplines, including sociology, education, health studies and business studies - the latest discussions of CAQDAS and E-research - an all new and extended methods glossary Doing Qualitative Research: Second Edition retains Silverman's uniquely accessible, hands-on style, walking the student through every aspect of the process of actually doing a qualitative research project. Packed with case studies and examples of students' experiences, the book has many features to aid study, including overviews, summaries of key skills and a glossary of terms. Each stage in the research process is grounded in worked examples based on the experiences of real students, with exercises designed both to test readers' knowledge and to encourage the development of practical skills.

'Doing Qualitative Research has been the single most useful text in my academic learning and now my teaching. Barely a working day goes by without me drawing on one of [Silverman's] many practical pointers or examples of sound practice' - Dr Bridget Hamilton, University of Melbourne

David Silverman is Visiting Professor in the Business School, University of Technology, Sydney, Emeritus Professor in the Sociology Department, Goldsmiths’ College and Adjunct Professor in the School of Education, Queensland University of Technology. He has lived in London for most of his life, where he attended Christ's College Finchley and did a BSc (Economics) at the London School of Economics in the 1960s. Afterwards, he went to the USA for graduate work, obtaining an MA in the Sociology Department, University of California, Los Angeles. He returned to LSE to write a PhD on organization theory. This was published as The Theory of Organizations in 1970.

Apart from brief spells teaching at UCLA, his main teaching career was at Goldsmiths College. His three major research projects were on decision making in the Personnel Department of the Greater London Council (Organizational Work, written with Jill Jones, 1975), paediatric outpatient clinics (Communication and Medical Practice, 1987) and HIV-test counselling (Discourses of Counselling, 1997).

He pioneered a taught MA in Qualitative Research at Goldsmiths in 1985 and supervised around 30 successful PhD students. Since becoming Emeritus Professor in 1999, he has continued publishing methodology books. David regularly runs qualitative research workshops for five universities in Sydney and Brisbane. He has also run workshops for research students in Finland, Norway, Sweden, Denmark, France, Sri Lanka and Tanzania. Since 2000, he has done voluntary work with people with dementia. resident in an old people’s home

Besides all this, David's other interests include classical music, literary fiction, bridge, county cricket and spending time with his grandchildren.