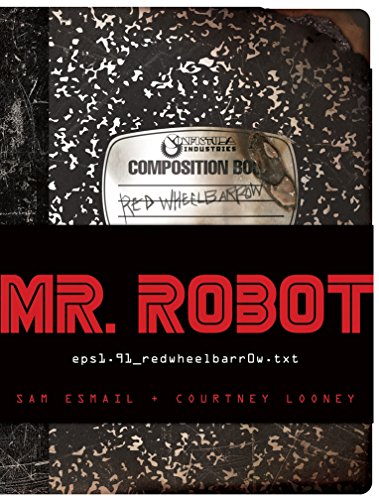 Before and during the events of season two, Elliot recorded his most private thoughts in this journal—and now you can hold this piece of the series in your hands. Experience Elliot’s battles to gain control of his life and his struggles to survive increasingly dangerous circumstances, in a brand-new story rendered in his own words.

The notebook also holds seven removable artifacts—a ripped-out page, a newspaper clipping, a mysterious envelope, and more—along with sketches throughout the book. You’ll discover the story behind MR. ROBOT season two and hints of what is to come. This book is the ultimate journey into the world of the show—and a key to hacking the mind of its main character.

MR. ROBOT is a psychological thriller that follows Elliot (Rami Malek, The Pacific), a young programmer, who works as a cyber-security engineer by day and as a vigilante hacker by night. Elliot finds himself at a crossroads when the mysterious leader (Christian Slater, Adderall Diaries) of an underground hacker group recruits him to destroy the firm he is paid to protect.

“Sam Esmail is one of the most innovative creators to make his mark on television in a long time.” —Rolling Stone

“MR. ROBOT has the potential to be one of the defining shows of our age.” —TIME

Golden Globe Awards for Best Television Series, Drama, and Best Performance by an Actor in a Supporting Role in a Series, Mini-Series or Motion Picture Made for Television (Christian Slater)

Sam Esmail is the creator, executive producer, director, and writer of MR. ROBOT. After graduating NYU’s Tisch School of the Arts, Esmail attended AFI’s directing program, where he received his MFA. His screenplays include Sequels, Remakes & Adaptions; Norm the Movie; and Comet, which he directed.

Courtney Looney is a writer on MR. ROBOT. She has worked extensively in the film, commercial, music video, and television industries as a writer, director, and producer.

Descrizione libro Hardback. Condizione: New. Language: English. Brand new Book. Step inside the frontlines of the hit TV show Mr. Robot with this new in-world fiction book by series creator and showrunner Sam Esmail and series writer Courtney Looney-the first and only book to tie in to USA's Golden Globe (R) Award-winning series. The book will tell a brand-new story, reveal secrets from the show's second season, and tease developments to come. With removable items from the world of the show, the book will give readers a chance to hold a piece of the series in their own hands. Mr. Robot is a new kind of television show-one that explores, more realistically than any of its contemporaries, mental health issues, income inequality, data security, and corporate power, all through the lens of the generation just coming of age. The New York Times called it "relentless, sensational, and unabashedly suspenseful," the New Yorker called it "terrific" and listed it among the year's best TV, and Rolling Stone said it's "easily the year's most audacious drama" and the "best TV show of 2015." Stars Rami Malek and Christian Slater took home a Critics' Choice (R) Award and a Golden Globe Award, respectively, and the show itself received a Golden Globe Award and a Critics' Choice Award for best television drama. In Mr. Robot, Elliot Alderson is a troubled young computer coder who struggles with depression and paranoia. His day job as a cybersecurity specialist doesn't fully utilize his talents, so he turns to vigilantism in his free time as a "white hat" hacker, fighting for causes society fails to champion. He self-medicates with dangerous drugs, and, as he's drawn into the web of an anarchist known as Mr. Robot, we begin to understand the secrets he's been keeping from himself. Soon, Elliot's hacking skills plunge him into a battle to destroy a key center of society's power and finance-the world's largest, and most maleficent, corporation. At the same time, we see that Elliot has been anything but a reliable narrator, with the details of his past and damaged psyche surfacing in ways that endanger the entire world. Codice articolo AA79781419724428