Articoli correlati a The Art and Flair of Mary Blair: An Appreciation

Canemaker, John The Art and Flair of Mary Blair: An Appreciation

The Art and Flair of Mary Blair: An Appreciation 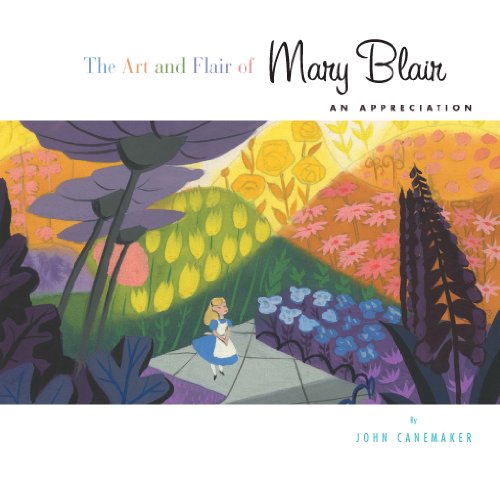 For more than a dozen years, a soft spoken, unassuming woman dominated design at The Walt Disney Studios with a joyful creativity and exuberant color palette that stamped the look of many classic Disney animated features, including Cinderella and Peter Pan. Favorite theme park attractions, most notably the "It's A Small World" boat ride, originally created for the 1964 New York World's Fair, were also among her designs. Now the story behind one of Walt's favorite artists is celebrated in this delightful volume of whimsical art and insightful commentary. In her prime, Mary Blair was an amazingly prolific American artist who enlivened and influenced the not-so-small worlds of film, print, theme parks, architectural decor, and advertising. Her art represented and communicated pure pleasure to the viewer. Mary Blair's personal flair was at one with the imagery that flowed effortlessly and continually from her brush for more than half a century. Walt Disney loved her art and championed it at the Studio. The two shared many sensibilities, including a childlike fondness for playfulness in imagery.

"This book is Disney's love letter, or maybe a thank you note, to the legacy of Mary Blair. It features so much of her beautiful work, all in vivid color, with notes about what inspired which piece, how they are developed, and when they were drawn. It is gorgeous to look at, and everyone should have a copy in their library."―Romper

PRAISE FOR PAPER DREAMS: THE ART & ARTISTS OF DISNEY STORYBOARDS

"Paper Dreams is comics and animation historian Canemaker's celebration of Disney's greatest contribution to filmmaking, the storyboard. Developed as a way of visually communicating a script, the storyboard has become a commonplace of filmmaking-and not just for animated films. Canemaker examines the creative processes of the Disney studio and profiles such individual talents as Bill Peet, Ted Sears, and-surprise!-Walt Disney, whom he presents as an artist rather than as an impresario. A veteran observer of animation and a gainfully employed academic, Canemaker delivers measured accolades that are far more impressive than the usual Disney corporate rah-rah."―American Library Association Booklist

JOHN CANEMAKER is an Academy Award and Emmy Award-winning animation filmmaker, and a tenured professor and director of the film animation program at New York University's Tisch School of the Arts. He has written numerous books on animation. Canemaker has contributed more than one hundred related essays, reviews, and articles to periodicals, including The New York Times, the Los Angeles Times and The Wall Street Journal. He lives in New York City and Bridgehampton.

2. The Art and Flair of Mary Blair: An Appreciation (Hardback or Cased Book)