Articoli correlati a A Place of Remembrance: Official Book of the National...

A Place of Remembrance: Official Book of the National September 11 Memorial [Lingua Inglese] 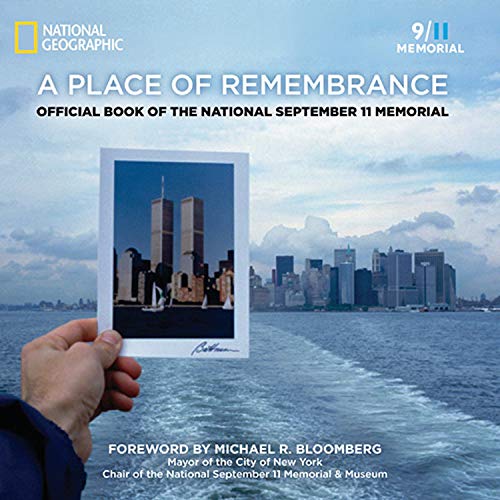 On September 11, 2011, the world will be watching as the National September 11 Memorial opens on the site of the World Trade Center. With photographs and architectural plans never before published, paired with comments in the very voices of those who witnessed the event, those who struggled in its shadow for days and months after, and those who have dedicated the years since to rebuilding a place of hope and meditation at Ground Zero, this book will stand apart from all the rest on the tenth anniversary of that world-changing event. Heavily illustrated and elegantly designed, the book recalls the excitement and symbolism of the Twin Towers, the horror and chaos of the attack of 9/11, the fierce devotion and exhaustion as rescue of living victims became recovery of remains. But it also carries on from that date in history to tell the inside story of the long, complex, and sometimes contentious efforts to turn eight acres of Downtown Manhattan into a lasting memorial to those lost in New York, Pennsylvania, and at the Pentagon. A solemn reminder, a historic keepsake, and a fascinating read, this is the official book published by and about the National September 11 Memorial, created by those who have been working for years to honor those who died that day. A special fold-out lists all the names of the victims, making the book itself an enduring memorial to those who died on September 11.

“Only National Geographic could publish a book so beautifully made and dedicated...it is a perfectly crafted tribute to the memorial site...thank you NatGeo for another lovingly made book.” –Amazon.com

“If you want to reflect on that day ten years ago but you're also ready to look forward, this is a book to find. For you, "A Place of Remembrance" will definitely leave its mark.” –Pittsburgh Tribune-Review
“Although the book recounts the terror, it focuses on the memorial...and, after 10 years, hope is probably what most readers, and most Americans, are looking for.” –The Columbus Dispatch

“[It] begins with a history of the World Trade Center and an account of 9/11, then covers the contentious process of creating the memorial on the site that will open on the 10th anniversary.”
–St. Petersburg Times

“The primary focus is on the initiative to commemorate victims with a spectacular memorial, which opens next week in the footprints of the original twin towers.” –Fort Worth Star Telegram

“The book gives respectful attention to the horrors of Sept. 11, 2001, and the heroic recovery efforts, but then focuses on the process of deciding how best to memorialize the tragic and historic event on eight acres of real estate in Lower Manhattan.” –Chicago Sun Times

“Published to coincide with the opening of the official New York memorial, ‘A Place of Remembrance’ features vivid accounts of the day and striking photography. The fold-out listing victims’ names is powerful.” –Boston Herald

“Filled with pictures and information about the new Memorial built on the site of the World Trade Center, [the book] evokes images and memories of that terrible day and replaces them with a message of hope. Remembrance recounts the events of the day, as well as the history of the memorial and how it's come to be. The book is getting five star reader reviews, as well as critical reviews for its candor and reverence of the people and place.” –Lexington Examiner (Kentucky)

The attacks of September 11, 2001, changed our world forever, and they brought loss and grief on a scale we had never known. But the aftermath of the attacks also revealed stories of heroism and sacrifice that inspired us all. They brought us an even deeper appreciation for, and commitment to, our country’s founding freedoms. And they brought a powerful sense of unity not just to Americans, but also to people around the world. Out of the ashes of that clear September morning arose what the terrorists could never destroy: hope for a better future, faith in our common humanity, and pride in our country’s freedoms and ideals.

The universal impact of the terrorist attacks, and the ethnic and religious diversity of the victims, led people from around the world to offer their support, encouragement, and blessings to our city and country. Many joined Americans from all 50 states who selflessly stepped forward to assist in the unprecedented rescue and recovery. Together with everyone who supported a grieving neighbor, or donated to a charity, or displayed a ribbon or an Ameri- can flag, we sent a message to the terrorists: We may bend, but we will not break. We may stumble, but we will get back up. Our resilience was so strong because our defiance was so fierce.

This resilience is the true legacy of 9/11. It defined the recovery effort itself, and it is at the heart of the mission of the National September 11 Memorial & Museum. This book chronicles the story of September 11 and the memorial, which is dedicated to the memory of all those killed in the terrorist attacks—in New York City, at the Pentagon, near Shanksville, Pennsylvania, and in the 1993 World Trade Center bombing. The memorial will be forever a solemn place of reflection and remembrance; we owe that to all those who lost loved ones on 9/11. At the same time, the memorial will forever serve as a reminder of the enormous loss suffered that day, and the enormous sacrifices that were made—and an obligation we owe to future generations.

Family members played a crucial role in the planning and development of the memorial, and it could not have been built without the strong support they have given it. Nor could it have been built without the generous contributions made by people living in all 50 states and 38 countries. Their generosity grew out of the spirit of global unity that emerged in the aftermath of the attacks, and that helped America through some of its darkest hours.

Since the attacks, millions of people from every corner of the globe have visited the World Trade Center site to pay their respects to those we lost. Now they arrive to experience a memorial as beautiful and inspiring as any that has ever been built, which is a testament not only to the creativity of Michael Arad’s and Peter Walker’s design, but also to the hard work of the memorial staff.

The memories of all those we lost; the courage of all those who saved others; the solidarity that the world showed us; and the resilience that came to define the aftermath of the attacks—all will live on in the memorial and museum, just as they live on in our hearts. And as long as they do, terrorism cannot and will not prevail in our society.

1. A Place of Remembrance: Official Book of the National September 11 Memorial

2. A Place of Remembrance: Official Book of the National September 11 Memorial

3. A Place of Remembrance: Official Book of the National September 11 Memorial

4. A Place of Remembrance: Official Book of the National September 11 Memorial

5. A Place of Remembrance: Official Book of the National September 11 Memorial (9/11 Memorial)