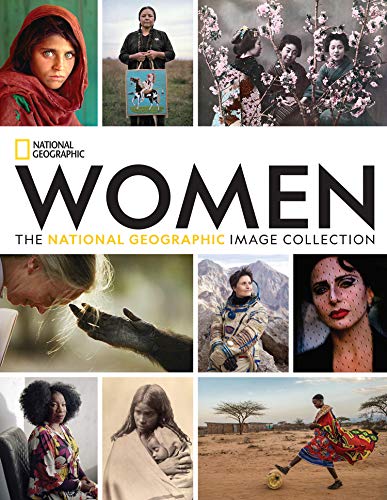 This powerful photography collection, drawn from the celebrated National Geographic archive, reveals the lives of women from around the globe, accompanied by revelatory new interviews and portraits of contemporary trailblazers including Oprah Winfrey, Jane Goodall, and Christiane Amanpour.

#MeToo. #GirlBoss. Time's Up. From Silicon Valley to politics and beyond, women are reshaping our world. Now, in anticipation of the 100th anniversary of the 19th amendment, this bold and inspiring book from National Geographic mines 130 years of photography to showcase their past, their present, and their future. With 400+ stunning images from more than 50 countries, each page of this glorious book offers compelling testimony about what it means to be female, from historic suffragettes to the haunting, green-eyed "Afghan girl."
Organized around chapter themes like grit, love, and joy, the book features brand-new commentary from a wide swath of luminaries including Laura Bush, Gloria Allred, Roxane Gay, Melinda Gates, New Zealand prime minister Jacinda Ardern, and the founders of the #MeToo and Black Lives Matter movements. Each is accompanied by a bold new portrait, shot by acclaimed NG photographer Erika Larsen. The ultimate coffee table book, this iconic collection provides definitive proof that the future is female.

One of the world's leading nonfiction publishers, NATIONAL GEOGRAPHIC has published more than 1,700 titles, featuring such categories as history, travel, nature, photography, space, science, health, biography, and memoir. A portion of its proceeds is used to fund exploration, conservation, and education through ongoing contributions to the work of the National Geographic Society.
Susan Goldberg is editorial director of National Geographic Partners and editor in chief of National Geographic. She is the 10th editor — and the first female editor— of the magazine, which published its first issue in 1888. Under her leadership, National Geographic has been honored with five National Magazine Awards, including the top prize for General Excellence in 2019. It was a finalist for the Pulitzer Prize for Feature Photography in 2019 and for Explanatory Reporting in 2017, and has received numerous other awards for its stories, photos, graphics, maps and design. Before National Geographic, Goldberg was an executive editor at Bloomberg News, and served as the top editor at the San Jose Mercury News and the (Cleveland) Plain Dealer. In 2019 she was named by Washingtonian magazine as one of Washington’s most influential women. Goldberg lives in Washington, D.C., with her husband.

Descrizione libro Hardcover. Condizione: New. Hardcover. #MeToo. #GirlBoss. Time's Up. From Silicon Valley to politics and beyond, women are reshaping our world. Now, in anticipation of the 100th anniversary of the 19th amendment, this bold and .Shipping may be from multiple locations in the US or from the UK, depending on stock availability. 512 pages. 2.702. Codice articolo 9781426220654