Articoli correlati a The Development of Children

The Development of Children 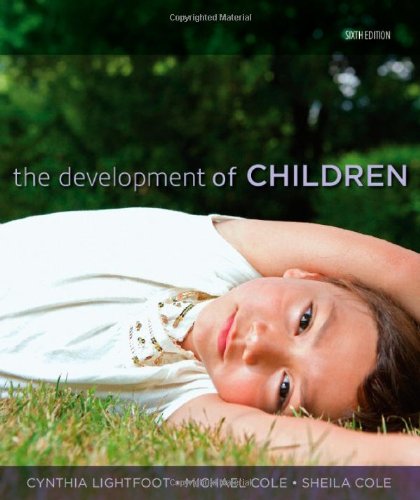 Like no other text, The Development of Children tells the story of how biological and cultural processes intertwine over the course of childhood. Building on the legacy of Michael and Sheila Cole, and now under the lead authorship of Cynthia Lightfoot, this acclaimed textbook enters an exciting new era, bringing an integrated biocultural perspective to the teaching and learning of childdevelopment.

Within the chronological organization of the book, you will find a continued emphasis on contemporary research, biology and the brain, the linking of theory to practice, and the emphasis on cultural issues that have earned the textbook enthusiastic support edition after edition. But you will also find a fresh new vision and voice. This thoroughly revised text guides students through the latest scholarship on the biological and cultural processes that frame the interacting physical, cognitive, social, and emotional domains of development.

Cynthia Lightfoot is Professor and Head of Human Development and Family Studies at the Pennsylvania State University, Brandywine. Her published works focus on the sociocultural contexts of child and adolescent development, most recently, on teen pregnancy, identity development, and youth culture. Lightfoot has served on the editorial boards of Culture and Psychology and Cognitive Development, and as Vice President of the Jean Piaget Society. Her interest in children and adolescents was fueled by experiences working with emotionally disturbed and autistic children in schools and as a child development specialist in a program for teenage mothers.

Michael Cole is an all-University of California Professor of Psychology, Communication, and Human Development. His home base is University of California, San Diego, where he is the Director of the Laboratory of Comparative Human Cognition. For many years he spent his afternoons participating with children and undergraduates in development-enhancing after-school programs. He is an editor of the journal Mind, Culture and Activity. He has published widely on the role of culture and schooling in development for which he has been awarded honorary degrees at Copenhagen University and the University of Helsinki. He is a member of the American Academy of Arts and Sciences and the National Academies of Education (of the United States and Russia). Sheila Cole is a former journalist who specialized in writing about families, children, development, and education. She is also a children's writer. Her most recent book offers a history of American childhood and is written for young people. She has also authored picture books, historical fiction, and novels for young adults. She participates in literacy programs for homeless adolescents. Product Description:

1. The Development of Children

2. The Development of Children