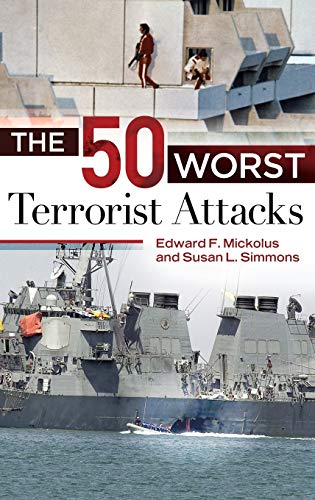 "In the last 50 years, terrorists have committed hundreds of horrific acts of violence to further their causes. This accessible, single-volume text covers the most significant terrorist acts across contemporary history worldwide"--

Edward F. Mickolus, PhD, served in analytical, operational, management, and staff positions in the Central Intelligence Agency for 33 years, where he was CIA's first full-time analyst on international terrorism.

Descrizione libro Hardback. Condizione: New. Language: English. Brand new Book. In the last 50 years, terrorists have committed hundreds of horrific acts of violence to further their causes. This accessible, single-volume text covers the most significant terrorist acts across contemporary history worldwide.Since the attacks on September 11, 2001, terrorism has remained the chief threat to international stability and security. The 50 Worst Terrorist Attacks draws on all forms of terrorism-international, transnational, and domestic-anywhere in the world, covering all types of acts (e.g., bombings, assassinations, armed attacks, skyjackings) by any organization and ideology. The work goes beyond documenting the key events that occurred in or involved the United States; it also covers important terrorist attacks by left- and right-wing organizations, religiously motivated groups, and separatists that are largely unknown among Western audiences. Each entry supplies the details of the attack-the perpetrators, victims, and eventual resolution-as well as the political, social, and international contexts in which the event occurred. Readers will grasp the evolution of terrorist activities and methodologies in the 20th and 21st centuries, understand the importance of each event in the development of the terrorist repertoire, and gauge the responses intended to counter these new kinds of attacks.Provides a chronological treatment of all major terrorist attacks in the last 50 years worldwide, enabling readers to grasp how terrorist acts have changed over timeClearly explains the importance of each attack in terms of how the event spawned new types of attacks or targets, elicited new government responses, resulted in increased media coverage, or otherwise served as a turning point in the history of terrorismProvides a readable review of representative attacks that illustrates the differences in terrorists' thinking, goals, milieu and reach, and attack styles; and the differences in responses and their effectivenessDocuments terrorists' targeting of U.S. citizens and interests in the United States and abroadReflects the economic impact of increasing security measures in response to terrorist attacks and threats, both at home and internationally. Codice articolo LHB9781440828270