Articoli correlati a To Walk With the Devil: Slovene Collaboration and Axis...

Kranjc, Gregor Joseph To Walk With the Devil: Slovene Collaboration and Axis Occupation, 1941-1945

To Walk With the Devil: Slovene Collaboration and Axis Occupation, 1941-1945 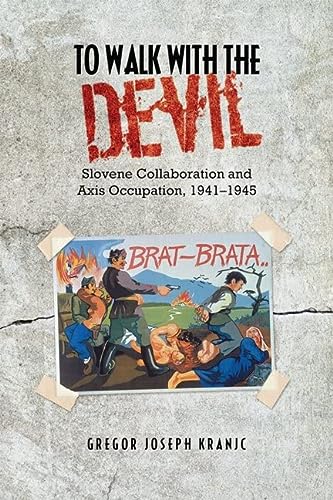 In the spring of 1941, when Slovenia was invaded by Germany, Italy, and Hungary, Slovenes faced at best assimilation, and at worst deportation or extermination. Still, a significant number of Slovenes would eventually collaborate with the Axis powers. Why were they so ready to work with their invaders, and why did the occupiers permit this collaboration?

Gregor Joseph Kranjc investigates these questions in To Walk with the Devil, the first English-language book-length account of Slovene-Axis collaboration during the Second World War. Examining archival material and post-war scholarly and popular literature, Kranjc describes the often sharp divide between Communist-era interpretations of collaboration and those of their émigré anti-Communist opponents.

Kranjc situates this divide in the vicious civil war that engulfed Slovenia during its occupation – a conflict that witnessed at its bloody climax the execution of over 10,000 Slovene collaborators and opponents of the new Communist Yugoslav regime in the wake of liberation. To Walk with the Devil makes clear how these grisly events continue to ripple through Slovene society today.

Gregor Joseph Kranjc is an assistant professor in the Department of History at Brock University.