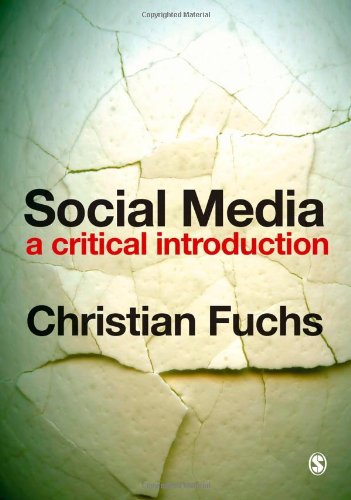 Now more than ever, we need to understand social media - the good as well as the bad. We need critical knowledge that helps us to navigate the controversies and contradictions of this complex digital media landscape. Only then can we make informed judgements about what's happening in our media world, and why.

Showing the reader how to ask the right kinds of questions about social media, Christian Fuchs takes us on a journey across social media, delving deep into case studies on Google, Facebook, Twitter, WikiLeaks and Wikipedia. The result lays bare the structures and power relations at the heart of our media landscape.

This book is the essential, critical guide for all students of media studies and sociology. Readers will never look at social media the same way again.

This is the most complete and wide-ranging discussion of social media there is. An introduction not only to social media, but to critical theory and how it relates to contemporary digital culture, this book astutely illuminates an increasingly important social phenomenon that has become an integral part of modern daily living. (Vincent Miller 2013-09-02)

Until now, philosophical contributions to understanding the newer media have been trivially apolitical. Finally, in the assured hands of Christian Fuchs, readers have a brilliant introduction to the field that is as astute as it is engaged. (Toby Miller 2013-10-09)

Christian Fuchs has turned his considerable talents to that rarest of academic creations: a truly, unabashedly critical textbook on a timely and important topic for contemporary media studies. If you want your students to think about issues of power and social justice, if you want to challenge them to re-imagine the world, and if you want an alternative to the anodyne and borderline fan-like writing that has become the stuff of new media texts, this is the book for you. (Mark Andrejevic 2013-09-12)

He is a member of the European Sociological Association's Executive Committee. As well as /Social Media: A Critical Introduction/ (2014), he is the author of /Reading Marx in the Information Age: A Media and Communication Studies Perspective on Capital Volume 1/ (2016), /Culture and Economy in the Age of Social Media/ (2015), /Digital Labour and Karl Marx/ (2014), /OccupyMedia! The Occupy Movement and Social Media in Crisis Capitalism/ (2014), /Foundations of Critical Media and Information Studies/ (2011), and /Internet and Society: Social Theory in the Information Age /(2008).