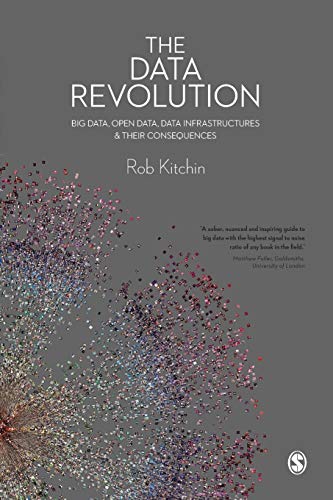 "Carefully distinguishing between big data and open data, and exploring various data infrastructures, Kitchin vividly illustrates how the data landscape is rapidly changing and calls for a revolution in how we think about data."
- Evelyn Ruppert, Goldsmiths, University of London

"Deconstructs the hype around the ‘data revolution’ to carefully guide us through the histories and the futures of ‘big data.’ The book skilfully engages with debates from across the humanities, social sciences, and sciences in order to produce a critical account of how data are enmeshed into enormous social, economic, and political changes that are taking place."
- Mark Graham, University of Oxford

Traditionally, data has been a scarce commodity which, given its value, has been either jealously guarded or expensively traded.  In recent years, technological developments and political lobbying have turned this position on its head. Data now flow as a deep and wide torrent, are low in cost and supported by robust infrastructures, and are increasingly open and accessible.

A data revolution is underway, one that is already reshaping how knowledge is produced, business conducted, and governance enacted, as well as raising many questions concerning surveillance, privacy, security, profiling, social sorting, and intellectual property rights.

In contrast to the hype and hubris of much media and business coverage, The Data Revolution provides a synoptic and critical analysis of the emerging data landscape.  Accessible in style, the book provides:

Kitchin’s powerful, authoritative work deconstructs the hype around the ‘data revolution’ to carefully guide us through the histories and the futures of ‘big data.’ The book skilfully engages with debates from across the humanities, social sciences, and sciences in order to produce a critical account of how data are enmeshed into enormous social, economic, and political changes that are taking place. It challenges us to rethink data, information and knowledge by asking - who benefits and who might be left out; what these changes mean for ethics, economy, surveillance, society, politics; and ultimately, whether big data offer answers to big questions. By tackling the promises and potentials as well as the perils and pitfalls of our data revolution, Kitchin shows us that data doesn’t just reflect the world, but also changes it. (Dr Mark Graham 2013-12-30)

With a lucid prose and without hyperbole, Kitchin explains the complexities and disruptive effects of what he calls ‘the data revolution’.  The book brilliantly provides an overview of the shifting socio-technical assemblages that are shaping the uses of data today. Carefully distinguishing between big data and open data, and exploring various data infrastructures, Kitchin vividly illustrates how the data landscape is rapidly changing and calls for a revolution in how we think about data. (Evelyn Ruppert)

An incredibly well written and accessible book which provides readers who will be curious about the buzz around the idea of big data with: (a) an organising framework rooted in social theory (important given the dominance of technical writings) through which to conceptualise big data; (b) detailed understandings of each actant in the various data assemblages with fresh and novel theoretical constructions and typologies of each actant; (c) the contours of a critical examination of big data (whose interests does it serve, where, how and why). These are all crucial developments its seems to me and I think this book will become a trail blazer because of them. This is going to be a biggie citation wise and a seminal work.

Data has become a new key word for our times. This is just the book I have been waiting for: a detailed and critical analysis that will make us think carefully about how data participate in social, cultural and spatial relations.

By carefully analysing data as a complex socio-technical assemblage, Rob Kitchin discusses thought-provoking aspects of data as a technical, economic and social construct that are often ignored or forgotten despite the increasing focus on data production and usage in contemporary life. This book unpacks the complexity of data as elements of knowledge production, and not only provide readers from a variety of disciplinary areas with useful conceptual framings, but  also with a challenging set of open issues to be further explored and engaged with as the “data revolution” progresses. (Luigina Ciolfi)

Much talk of big data is big hype. Different phenomena dumped together, a dearth of definitions and little discussion of the complex relationships that give rise to and shape big data practices sums it up. Rob Kitchin puts us in his debt by cutting through the cant and offering not only a clear analysis of the range, power and limits of big data assemblages but a pointer to the crucial social, political and ethical issues to which we should urgently attend. Read this book.

Data matter and have matter, and Rob Kitchin thickens this understanding by assembling the philosophical, social scientific, and popular media accounts of our data-based living. That the give and take of data is increasingly significant to the everyday has been the mainstay of Kitchin’s long and significant contribution to a critical technology studies. In The Data Revolution, he yet again implores us to think beyond the polemical, to signal a new generation of responsive and responsible data work. Importantly, he reminds us of the non-inevitability of data, articulating the registers within which interventions can and already are being made. Kitchin offers a manual, a set of operating instructions, to better grasp and grapple with the complexities of the coming world, of such a ‘data revolution’.

The Data Revolution is one of the first systematic attempts to strip back the hype surrounding our current data deluge and take stock of what is really going on... The book acts as a helpful wayfinding device in an unfamiliar terrain, which is still being reshaped, and is admirably written in a language relevant to social scientists, comprehensible to policy makers and accessible even to the less tech savvy among us.... The Data Revolution’s main success lies in clearing a space – cutting out the conjecture and gloss, the Utopians and the reactionaries pulling in different directions – and locating a common ground from which to build something.

Kitchin’s The Data Revolution is absolutely recommendable and provides a sober account of the interaction between society and big data. Kitchin avoids the hubris and speculation often found in literature about big data to focus on big data’s logic. [It] would serve as [an] ideal book in introductory graduate courses that deal with data and information in any capacity. (Andrew J. Iliadis) L'autore:

Rob Kitchin is a professor and ERC Advanced Investigator in the National Institute of Regional and Spatial Analysis at the National University of Ireland Maynooth, for which he was director between 2002 and 2013. He has published widely across the social sciences, including 23 books and 140 articles and book chapters. He is editor of the international journals, Progress in Human Geography and Dialogues in Human Geography, and for eleven years was the editor of Social and Cultural Geography. He was the editor-in-chief of the 12 volume, International Encyclopedia of Human Geography, and edits two book series, Irish Society and Key Concepts in Geography. He is currently a PI on the Programmable City project, the Digital Repository of Ireland, and the All-Island Research Observatory.

He has delivered over 100 invited talks at conferences and universities and his research has been cited over 600 times in local, national and international media. His book ‘Code/Space’ (with Martin Dodge) won the Association of American Geographers ‘Meridian Book Award’ for the outstanding book in the discipline in 2011 and a ‘CHOICE Outstanding Academic Title 2011’ award from the American Library Association. He was the 2013 recipient of the Royal Irish Academy's Gold Medal for the Social Sciences.