Rahman, Zia, Haider In the Light of What We Know [Lingua inglese]

In the Light of What We Know [Lingua inglese] 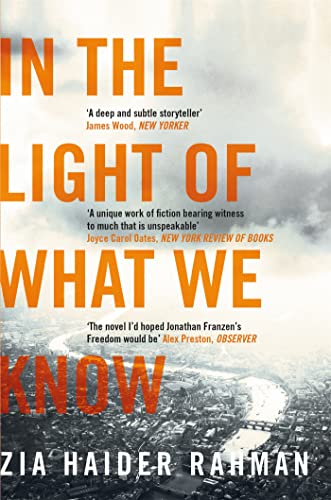 WINNER: JAMES TAIT BLACK PRIZE 2015 SHORTLISTED: GOLDSMITHS PRIZE and SPECSAVERS NATIONAL BOOK AWARDS 2014 LONGLISTED: GUARDIAN FIRST BOOK AWARD and ORWELL PRIZE FOR FICTION 2014 One September morning in 2008, an investment banker approaching forty, his career in collapse and his marriage unravelling, receives a surprise visitor at his West London home. He struggles to place the dishevelled figure carrying a backpack, until he recognizes a friend from his student days, a brilliant man who disappeared years earlier under mysterious circumstances. The friend has resurfaced to make a confession of unsettling power. Theirs is the age-old story of the bond between two men and the betrayal of one by the other. As the friends begin to talk, and as their room becomes a world, a journey begins that is by turns exhilarating, shocking, intimate and strange. Set against the breaking of nations and beneath the clouds of economic crisis, and moving between Kabul, New York, Oxford, London and Islamabad, In the Light of What We Know tells the story of people wrestling with unshakeable legacies of class and culture, and pushes at the great questions of love, origins, science, faith and war. In an extraordinary feat of imagination, Zia Haider Rahman has woven the seismic upheavals of our young century into a novel of rare compassion, scope, and courage.

The big read with the big answers . . . Here comes a novel capable of taking back the No 1 spot: Zia Haider Rahman's debut In the Light of What We Know. . . At its heart, the book is a story of two friends making their way in the world. Theirs is a dizzying voyage that touches on many of the key issues of our time. (Sunday Times)

Dazzling . . . astonishingly achieved . . . Rahman proves himself a deep and subtle storyteller . . . a novel unashamed by many varieties of knowledge-its characters talk, brilliantly, about mathematics, philosophy, exile and immigration, warfare, Wall Street and financial trading, contemporary geopolitics, Bangladesh, Pakistan, Afghanistan, English and American society, Islamic terrorism, Western paternalism, Oxford and Yale. Isn't this kind of thinking-worldly and personal, abstract and concrete, essayistic and dramatic-exactly what the novel is for? How it justifies itself as a form? Rahman uses his novel to think hard and well, chiefly about connections among class, knowledge, and belonging. In the Light of What We Know is what Salman Rushdie once called an "everything novel." It is wide-armed, hospitable, disputatious, worldly, cerebral. Ideas and provocations abound on every page. (James Wood The New Yorker)

This debut novel by Zia Haider Rahman, a Bangladeshi-born British writer who has worked as both an investment banker and an international human-rights lawyer, has been hailed in America as a "modern classic" and "the first truly great book of the new century". It is certainly an ambitious and extraordinary achievement . . . Pre-eminently a novel of ideas, the book overflows with sparkling essays on free will, the perception of time, the nature of memory, maps, flags, etymology and the axioms of mathematics . . . A novel about the entwining of politics and love and the painful quest for identity. As a meditation on the penalties of exile, the need for roots and the ways in which anger can consume a thoughtful man slighted by prejudice, this is a dazzling debut. (Sunday Times)

Bristling with ideas about mathematics and politics, history and religion, Rahman's novel also wrestles with the intricacies of the 2008 financial crash. It is encyclopedic in its reach and depth, dazzling in its erudition . . . It is, though, in the shattered figure of the novel's protagonist, Zafar, that the book finds its heart . . . In the Light of What We Know is an extraordinary meditation on the limits and uses of human knowledge, a heartbreaking love story and a gripping account of one man's psychological disintegration. This is the novel I'd hoped Jonathan Franzen's Freedom would be (but wasn't) - an exploration of the post-9/11 world that is both personal and political, epic and intensely moving. (Observer)

Brilliant and heartbreaking, In the Light of What We Know is the first truly great book of the new century. (Ceridwen Dovey, author of BLOOD KIN: A NOVEL)

This formidable novel unpacks friendship, betrayal, unknowability - and includes an astute take on Englishness, on class, on mathematical theory, human rights, and whether people can trust their own perception of the world (Observer)

Here it is, the vast and brilliant debut novel of our time for which readers have been waiting. Set against the backdrop of economic crises and the war in Afghanistan, Zia Haider Rahman's novel about a troubled friendship between two men-one born in the United States to well-placed parents from Pakistan, and the other born in Bangladesh-is deeply penetrating and profoundly intimate, as if made by a muralist whose heart belongs to the details. In the Light of What We Know is a novel of startling vision, written in a prose that's as strong and bold as it is impeccable. Who's the true heir to such greats as George Orwell and V.S. Naipaul? It's Zia Haider Rahman. (Richard McCann, author of MOTHER OF SORROWS)

A strange and brilliant novel . . . I was surprised it didn't explode in my hands (Amitava Kumar New York Times Book Review)

The main reason to get excited over Rahman's emerging presence as a writer are his sentences, ramifying and unraveling to bring in more and more ideas between full-stops in a way that few still alive can command (The Daily Beast)

A bold, epic debut novel set during the war and financial crisis that defined the beginning of our century

1. In The Light Of What We Know

2. In the Light of What We Know

3. In the Light of What We Know

4. In the Light of What We Know

5. In the Light of What We Know

6. In The Light Of What We Know

7. In the Light of What We Know

8. In the Light of What We Know

9. In the Light of What We Know