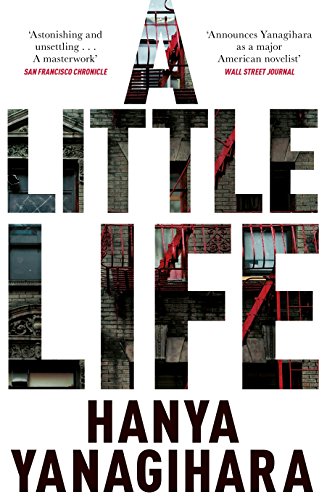 Shortlisted for the Man Booker Prize 2015 A Little Life by Hanya Yanagihara is an immensely powerful and heartbreaking novel of brotherly love and the limits of human endurance. When four graduates from a small Massachusetts college move to New York to make their way, they're broke, adrift, and buoyed only by their friendship and ambition. There is kind, handsome Willem, an aspiring actor; JB, a quick-witted, sometimes cruel Brooklyn-born painter seeking entry to the art world; Malcolm, a frustrated architect at a prominent firm; and withdrawn, brilliant, enigmatic Jude, who serves as their centre of gravity. Over the decades, their relationships deepen and darken, tinged by addiction, success, and pride. Yet their greatest challenge, each comes to realize, is Jude himself, by midlife a terrifyingly talented litigator yet an increasingly broken man, his mind and body scarred by an unspeakable childhood, and haunted by what he fears is a degree of trauma that he'll not only be unable to overcome - but that will define his life forever.

One of the pleasures of fiction is how suddenly a brilliant writer can alter the literary landscape . . . Ms. Yanagihara's immense new book . . . announces her, as decisively as a second work can, as a major American novelist. Here is an epic study of trauma and friendship written with such intelligence and depth of perception that it will be one of the benchmarks against which all other novels that broach those subjects (and they are legion) will be measured. In recent years, only Edward St. Aubyn's Patrick Melrose novels have confronted with similarly enduring power the long aftermath of abuse (and the sleepless duties required in loving abuse victims). But while Mr. St. Aubyn's writing relies on matador-like thrusts of barbed irony, A Little Life achieves its lasting effect with calm, thoroughgoing realism. There's an amazing sense of totality in the portrayals here, and in Jude especially. He is fragmented by fear and shame, but Ms. Yanagihara depicts him as a man in full. His life, the precarious essence of this important novel, is not less than an odyssey of survival (Wall Street Journal)

Martin Amis once asked, "Who else but Tolstoy has made happiness really swing on the page?" And the surprising answer is that Hanya Yanagihara has: counterintuitively, the most moving parts of "A Little Life" are not its most brutal but its tenderest ones, moments when Jude receives kindness and support from his friends . . . "A Little Life" feels elemental, irreducible-and, dark and disturbing though it is, there is beauty in it (Jon Michaud New Yorker)

How often is a novel so deeply disturbing that you might find yourself weeping, and yet so revelatory about human kindness that you might also feel touched by grace? Yanagihara's astonishing and unsettling second novel . . . plumbs the rich inner lives of all of her characters... You don't just care deeply about all these lives. Thanks to the author's exquisite skill, you feel as if you are living them . . . A Little Life is about the unimaginable cruelty of human beings, the savage things done to a child and his lifelong struggle to overcome the damage. Its pages are soaked with grief, but it's also about the bottomless human capacity for love and endurance . . . It's not hyperbole to call this novel a masterwork - if anything that word is simply just too little for it (San Francisco Chronicle)

[The] spring's must-read novel . . . Her debut . . . put her on the literary map, her massive new novel . . . signals the arrival of a major new voice in fiction . . . Her achievement has less to do with size than with her powerful evocation of the fragility of self . . . the pained beauty that suffuses this novel, an American epic that eloquently counters our culture's fixation with redemptive narratives. (Vogue US)

The triumph of A Little Life's many pages is significant: It wraps us so thoroughly in a character's life that his trauma, his struggles, his griefs come to seem as familiar and inescapable as our own. There's no one way to experience loss, abuse, or the effects of trauma, of course, but the vividness of Jude's character and experiences makes the pain almost tangible, the fall-out more comprehensible. It's a monument of empathy, and that alone makes this novel wondrous (Huffington Post)

Often painful but thoroughly brilliant . . . Yanagihara's massive new novel . . . is hurtful. That's because, among other things, it is the enthralling and completely immersive story of one man's unyielding pain. It also asks a compelling question: Can friends save us? Even from ourselves? . . . Yanagihara's close study of [her characters'] lives and Jude's trauma makes for a stunning work of fiction (New York Daily News)

This spellbinding, feverish novel sucks you in . . . One of the most compassionate, moving stories of our time . . . An exquisitely written, complex triumph (Oprah.com)

A darkly beautiful tale of love and friendship... I've read a lot of emotionally taxing books in my time, but A Little Life . . . is the only one I've read as an adult that's left me sobbing. I became so invested in the characters and their lives that I almost felt unqualified to review this book objectively . . . There are truths here that are almost too much to bear - that hope is a qualified thing, that even love, no matter how pure and freely given, is not always enough. This book made me realize how merciful most fiction really is, even at its darkest, and it's a testament to Yanagihara's ability that she can take such ugly material and make it beautiful (Los Angeles Times)

Capacious and consuming . . . Boast[s] a scale and immersive power to rival the recent epics of Donna Tartt and Elizabeth Gilbert . . . Alternately devastating and draining, A Little Life floats all sorts of troubling questions about the responsibility of the individual to those nearest and dearest and the sometime futility of playing brother's keeper. Those questions, accompanied by Yanagihara's exquisitely imagined characters, will shadow your dreamscapes (Boston Globe)

A novel of extraordinary intelligence and heart, a masterful depiction of heartbreak, and a dark and haunting examination of the tyranny of experience and memory.

Descrizione libro Paperback. Condizione: Very Good. The book has been read, but is in excellent condition. Pages are intact and not marred by notes or highlighting. The spine remains undamaged. Codice articolo CIN001261255

Descrizione libro Hardcover. Condizione: Good. Darkened tan to the page edges/pages Good condition is defined as: a copy that has been read but remains in clean condition. All of the pages are intact and the cover is intact and the spine may show signs of wear. The book may have minor markings which are not specifically mentioned. Most items will be dispatched the same or the next working day. Codice articolo wbb0021637204

Descrizione libro Hardcover. Condizione: Very Good. Condizione sovraccoperta: Very Good. 1st Edition. UK first edition, first printing (Picador, 2015). Flatsigned to title page. VG / VG unread condition with small bumps to the board top corners front and rear and minor pushing to the top of the spine (see photos). Protected dustwrapper. PLEASE READ BEFORE ORDERING Our descriptions are accurate. Photos are of the actual book(s) for sale. If you require additional photos, please ask. We will despatch your books rapidly (almost always within 24 hrs of the receipt of your order) using proper book wraps / boxes. For books sold for more than Ł50 we will use only despatch methods that are fully tracked, insured and will require a signature on delivery. Standard postage costs are included in our prices for UK customers. Priority UK rates are for Royal Mail Special Delivery, guaranteed by 1pm. For overseas customers, we have set a standard Abe postal rate, but will communicate direct with customers and charge the actual cost of postage and packing by tracked and insured delivery methods requiring signature. Please note that new EU regulations make it impractical for us to post books to the EU. Therefore, prospective customers from the EU are requested to email us before making an order so that we can discuss how best we might get the books they want to them. Signed by Author(s). Codice articolo 3948

Descrizione libro Hardcover. Condizione: Near Fine/Near Fine. First Edition. In excellent condition. Pages are intact and not marred by notes or highlig hting. The spine remains undamaged.(signed by author) A Little Life is divided into seven separate parts, and follows a chronological narrative with flashbacks frequently interspersed throughout. The novel's narrative perspectives shift throughout the story's progression. During the beginning of the novel, a third person omniscient perspective privileging one of Jude's, Willem's, JB's, or Malcolm's thoughts is utilized. As the story gradually shifts its focus towards Jude, its perspective progressively molds entirely around each character's interactions with Jude and the experiences of Jude himself. This literary perspective is punctuated by first person narratives told from an unspecified future by an older Harold. Codice articolo RWARE0000052514

Descrizione libro Hardcover. Condizione: Fine. Dust Jacket Included. 1st Edition. 1st edition, 1st printing hardback in unclipped dustjacket. Signed & dated in 2015 by the author on the title page with no other inscriptions. Book and dustjacket both in fine condition. Not a book club edition, ex library or a remainder. Scans available on request. Signed by Author(s). Codice articolo ABE-1643925018708