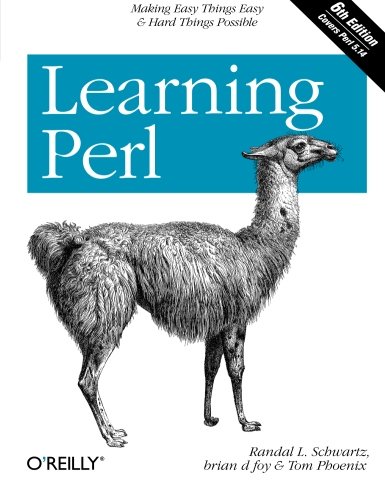 If you're just getting started with Perl, this is the book you want—whether you're a programmer, system administrator, or web hacker. Nicknamed "the Llama" by two generations of users, this bestseller closely follows the popular introductory Perl course taught by the authors since 1991. This 6th edition covers recent changes to the language up to version 5.14.

Perl is suitable for almost any task on almost any platform, from short fixes to complete web applications. Learning Perl teaches you the basics and shows you how to write programs up to 128 lines long—roughly the size of 90% of the Perl programs in use today. Each chapter includes exercises to help you practice what you've just learned. Other books may teach you to program in Perl, but this book will turn you into a Perl programmer.

Randal L. Schwartz is a two-decade veteran of the software industry. He is skilled in software design, system administration, security, technical writing, and training. Randal has coauthored the "must-have" standards: Programming Perl, Learning Perl, Learning Perl for Win32 Systems, and Effective Perl Learning, and is a regular columnist for WebTechniques, PerformanceComputing, SysAdmin, and Linux magazines.

He is also a frequent contributor to the Perl newsgroups, and has moderated comp.lang.perl.announce since its inception. His offbeat humor and technical mastery have reached legendary proportions worldwide (but he probably started some of those legends himself). Randal's desire to give back to the Perl community inspired him to help create and provide initial funding for The Perl Institute. He is also a founding board member of the Perl Mongers (perl.org), the worldwide Perl grassroots advocacy organization. Since 1985, Randal has owned and operated Stonehenge Consulting Services, Inc. Randal can be reached for comment at merlyn@stonehenge.com or (503) 777-0095, and welcomes questions on Perl and other related topics.

brian d foy is a prolific Perl trainer and writer, and runs The Perl Review to help people use and understand Perl through educational, consulting, code review, and more. He's a frequent speaker at Perl conferences. He's the co-author of Learning Perl, Intermediate Perl, and Effective Perl Programming, and the author of Mastering Perl. He was been an instructor and author for Stonehenge Consulting Services from 1998 to 2009, a Perl user since he was a physics graduate student, and a die-hard Mac user since he first owned a computer. He founded the first Perl user group, the New York Perl Mongers, as well as the Perl advocacy nonprofit Perl Mongers, Inc., which helped form more than 200 Perl user groups across the globe. He maintains the perlfaq portions of the core Perl documentation, several modules on CPAN, and some stand-alone scripts.

Tom Phoenix has been working in the field of education since 1982. After more than thirteen years of dissections, explosions, work with interesting animals, and high-voltage sparks during his work at a science museum, he started teaching Perl classes for Stonehenge Consulting Services, where he's worked since 1996. Since then, he has traveled to many interesting locations, so you might see him soon at a Perl Mongers' meeting. When he has time, he answers questions on Usenet's comp.lang.perl.misc and comp.lang.perl.moderated newsgroups, and contributes to the development and usefulness of Perl. Besides his work with Perl, Perl hackers, and related topics, Tom spends his time on amateur cryptography and speaking Esperanto. His home is in Portland, Oregon.