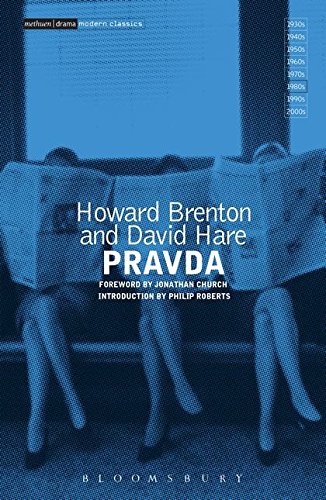 The press and politicians. A delicate relationship. Too close, and danger ensues. Too far apart, and democracy itself cannot function.

Pravda (which means "truth") is a satire written at the height of Thatcherism when huge political changes were afoot. The play essentially studies, through black humour and close scrutiny, the tabloid ethic and the media industry as a get-rich-quick-fix.

In the programme for the original 1985 production of Pravda, Brenton wrote: "Pravda means 'the truth'. English newspapers aren't propaganda sheets. The question is, why do so many of them choose to behave as if they are?"

The character of Lambert Le Roux is a South African newspaper tycoon and the owner of several companies, striding his way through the regional papers en route to Fleet Street. Turning broadsheets tabloid, dumbing down the message, and stretching the truth, Le Roux takes no prisoners as he manipulates politicians and creates a media monopoly out of a once-respected industry.

Le Roux is bent on dominating England's press as he has elsewhere in the world. As we see Le Roux accomplish his aims, we see also how the press is not the organ of truth we like to think it is. The dissemination of the truth is no longer its primary goal under the 'Lambert Le Rouxs' of our world. What is important now is what sells.

The play is an epic satire on the media in the Thatcher era; a morality tale about how Andrew, a young liberal journalist, finally succumbs to Le Roux, who makes him editor of a tabloid; and - allegedly - the play is a direct representation of Rupert Murdoch who, even in 1985, was a major force in media ownership.

This Modern Classics edition features an introduction by Philip Roberts, Emeritus Professor of Drama and Theatre Studies at the University of Leeds, and a foreword by Jonathan Church.

Pravda is an epic comedy - part The Front Page, part Arturo Ui - in which a press baron resembling Rupert Murdoch . . . does battle with over thirty characters as he conquers Fleet Street journalism and, by implication, liberal England's soul. --- New York Times

Howard Brenton is a British dramatist, noted for his controversial political plays of the 1970s and 80s. He became resident dramatist at the Royal Court in 1972, following on from David Hare. His plays include Revenge, Brassneck (a colloboration with David Hare), The Churchill Play, Epsom Downs, The Romans in Britain, Pravda (also a collaboration with Hare), Berlin Bertie, Paul, Never So Good, and In Extremis. He also wrote the TV programme Spooks and has translated many plays into English. In 2011 he won a Theatregoers' Choice Award for Best Play for Anne Boleyn.

Sir David Hare is a British playwright and director, noted for his critical examination of post-war British society. In 1968 he became a founder of the travelling fringe company, Portable Theatre, which performed some of his early plays. The following year he became resident playwright at the Royal Court Theatre, before being made resident playwright at the Nottingham Theatre in 1973. In 1974 he co-founded the Joint Stock Company. His plays include Slag, Brassneck, Fanshen, Pravda, Racing Demon, Murmuring Judges, The Absence of War, Amy's View, Via Dolorosa, The Permanent Way, Stuff Happens, The Vertical Hour, The Power of Yes, Berlin and Wall. He was knighted in 1998.