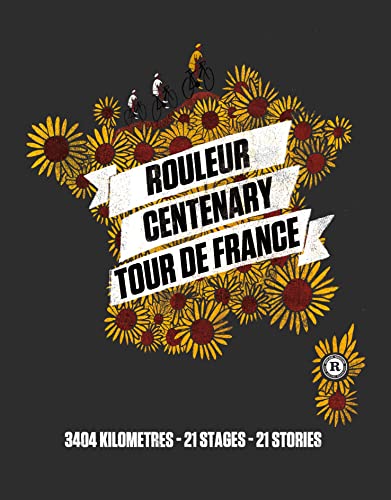 For the 100th edition of the world's greatest bike race, and the seventh annual edition of the sport's greatest cycling publication, we sent seven writers and photographers on the road at the Tour de France, each given three stages to record their individual takes on La Grande Boucle.

Photographer and writer Geoff Waugh follows two careers, one beginning, the other drawing to a close. Danny van Poppel, 19, became the youngest Tour rider since the Second World War, making an immediate impression with third place on the opening stage in Bastia. The hugely popular Jens Voigt, meanwhile, went out in style with numerous attacks during his final Tour at the age of 41.

The tiny village of Saint-Béat bordering the Pyrenees was devastated by flash floods in late June. Timm Kölln and Oliver Nilsson-Julien witness proud locals preparing for the arrival of stage 9 amidst destroyed homes and businesses.

Eurosport commentators Carlton Kirby and Sean Kelly spend three weeks in a cramped TV booth on the finish line at each day's stage. Robert Wyatt trains his lens on the broadcasters at Mont Saint-Michel, while Ian Cleverly goes walkabout with roving reporter - and recently retired pro cyclist - Rob Hayles as he interviews riders and managers on the start line.

Taz Darling and Rouleur Editor Guy Andrews get up close and personal with the Tour organisation. Race Director Christian Prudhomme and his team conjured up one of the best Tours in decades. Taz and Guy find out how on the road to Mont Ventoux.

Patience is a prerequisite of Tour-watching. Paolo Ciaberta finds fans on Alpe d'Huez who have been in position for days. Andy McGrath asks them why, as well as reporting on the Froome phenomenon and a disastrous race for the home nation.

Jakob Kristian Sřrensen and Morten Okbo hook up with Russian team Katusha for the final three stages to Paris - one day in the race car, the next witnessing tears of relief, then finally reaching the Champs-Élysées and tears of joy at an emotional after-party in the capital city.

Descrizione libro Hardcover. Condizione: Good. A tan to the page edges/pages Good condition is defined as: a copy that has been read but remains in clean condition. All of the pages are intact and the cover is intact and the spine may show signs of wear. The book may have minor markings which are not specifically mentioned. Most items will be dispatched the same or the next working day. Codice articolo wbb0020312382

Descrizione libro Paperback. Condizione: Very Good. The book has been read, but is in excellent condition. Pages are intact and not marred by notes or highlighting. The spine remains undamaged. Codice articolo GOR006177155