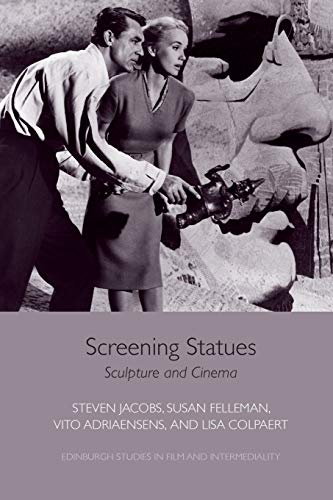 Whereas sculpture is an artistic practice that involves not only static but also material, three-dimensional, and durable objects, the cinema produces kinetic, immaterial, two-dimensional, and fleeting images. However, the history of cinema amply illustrates the attraction of these opposites: statues coming to life in early cinema and disturbing the peace in Surrealist and trance films; the optical and haptic exploration of sculptural volumes in art documentaries and artists' films; the lure of the wax museums in horror films; the statuary metaphors of post-war modernist cinema; the mythological living statues of the peplum genre; and contemporary art practices in which film is used as sculptural medium.

Dealing with a wide range of magical, mystical, cultural, historical, formal, and phenomenological interactions between film and sculpture, this book examines key sculptural motifs in film and cinematic sculpture in eight chapters and an extensive reference gallery.

Comprising a wealth of citations, investigative essays, conceptual and corporeal discussions, as well as the prolific supplemental reference gallery in part II, 'Screening Statues' is a venerable text in which to further explore the confluence of two intermedial forms, indebted to and entrenched within one another. --Matthew Johnson, Film Matters

Screening Statues marks an important contribution to the study of sculpture in film, not only as a record of sculpture s presence in film but also as a critical approach to the tensions and complexities that arise in film between human actors and their sculptural counterparts. --Jessica Schouela, Sculpture Journal

[Screening Statues] guarantees the reader access to a real textbook on sculpture and film, appealing to art lovers and film fans alike. This is a book that has long been due in that it fills a major gap in the field of statuary in film. --Fátima Chinita, Aniki

Steven Jacobs teaches at Ghent University and the University of Antwerp.

Susan Felleman is Professor of Art History and Film and Media Studies at the University of South Carolina.

Vito Adriaensens is a visiting scholar and Adjunct Assistant Professor at Columbia University's Film Department with a Fellowship from the Flemish Research Council and the European Union's Horizon 2020 Project at the University of Antwerp.

Lisa Colpaert is a fashion designer and a film historian. She works as a curator for Cinea at the Royal Belgian Film Archive and is undertaking a practice-based PhD at the London College of Fashion (University of the Arts London).

Descrizione libro EDINBURGH UNIVERSITY PRESS, United Kingdom, 2019. Paperback. Condizione: New. Language: English. Brand new Book. Explores the interaction between sculpture and cinema Screening Statues: Sculpture and Cinema is the first book to focus on the relationship between sculpture and the silver screen. It covers a broad range of magical, mystical and phenomenological interactions between the two media, from early film's eroticized tableaux vivants to enigmatic sculptures in modernist cinema. Sculptures are literally brought to life on the silver screen, while living people are turned into, or trapped inside, statuary. The book examines key sculptural motifs and cinematic sculpture in film history through a series of case studies and through an extensive reference gallery of 150 different films. Considering the work of directors like Georges Méličs, Jean Cocteau and Alain Resnais, as well as films like House of Wax, Jason and the Argonauts and Clash of the Titans, this is an innovative exploration of two different media, their artistic traditions and their respective theoretical paradigms. Key Features A unique book-length study of sculpture and cinema Explores the cinematic form and function of sculpture in 8 case studies that represent diverse genres and traditions throughout film history Features an extensive reference gallery of 150 films with short entries on each Innovatively brings together two media, their artistic traditions, and their respective theoretical paradigms. Codice articolo AAZ9781474431705