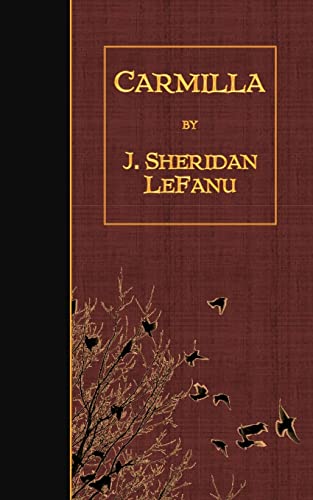 Joseph Thomas Sheridan Le Fanu (28 August 1814 – 7 February 1873) was an Irish writer of Gothic tales and mystery novels. He was the leading ghost-story writer of the nineteenth century and was central to the development of the genre in the Victorian era. M. R. James described Le Fanu as "absolutely in the first rank as a writer of ghost stories". Three of his best-known works are Uncle Silas, Carmilla and The House by the Churchyard.

The appearance of a young and beautiful houseguest jolts young Laura into remembering what may or may not have been a childhood nightmare. Strangely, her visitor, Carmilla, has exactly the same recollection. As Laura's health wanes throughout the visit, Carmilla's vivacity grows. Who would guess she's been dead for over 150 years? Megan Follows's dark and dramatic reading of this vampire classic complements the text perfectly. Refraining from characterization, she recounts Le Fanu's tale from Laura's horrified perspective, vividly illuminating her early relationship with Carmilla, colored by the clarity of retrospection, as the story is recalled later in Laura's life. Follows's voice shudders with disgust at Carmilla's evil, as do her listeners. R.P.L. © AudioFile 2003, Portland, Maine-- Copyright © AudioFile, Portland, Maine

Descrizione libro Paperback. Condizione: New. Language: English. Brand new Book. CarmillaJ. Sheridan LeFanuClassic Gothic FictionGOTHIC VAMPIRES GALORECarmilla is a Gothic novella by Joseph Sheridan Le Fanu and one of the early works of vampire fiction. It was first published in 1871 as a serial narrative in The Dark Blue. It tells the story of a young woman's susceptibility to the attentions of a female vampire named Carmilla. It predates Bram Stoker's Dracula by 26 years. The story has been adapted many times in film and other media.The story is presented by Le Fanu as part of the casebook of Dr. Hesselius, whose departures from medical orthodoxy rank him as the first occult doctor in literature. The story is narrated by Laura, one of the two main protagonists of the tale.Laura begins her tale by relating her childhood in a "picturesque and solitary" castle in the midst of an extensive forest in Styria, where she lives with her father, a wealthy English widower, retired from the Austrian Service. When she was six years old, Laura had a vision of a beautiful visitor in her bedchamber. She later claims to have been bitten on the chest, although no wounds are found on her.Twelve years later, Laura and her father are admiring the sunset in front of the castle when her father tells her of a letter he received earlier from his friend, General Spielsdorf. The General was supposed to bring his niece, Bertha Rheinfeldt, to visit the two, but the niece suddenly died under mysterious circumstances. The General ambiguously concludes that he will discuss the circumstances in detail when they meet later.Laura is saddened by the loss of a potential friend, and longs for a companion. A carriage accident outside Laura's home unexpectedly brings a girl of Laura's age into the family's care. Her name is Carmilla. Both girls instantly recognize the other from the "dream" they both had when they were rmilla appears injured after her carriage accident, but her mysterious mother informs Laura's father that her journey is urgent and cannot be delayed. She arranges to leave her daughter with Laura and her father until she can return in three months. Before she leaves, she sternly notes that her daughter will not disclose any information whatsoever about her family, past, or herself, and that Carmilla is of sound mind. Laura comments that this information seems needless to say, and her father laughs it off. Codice articolo APC9781507709085