Boarding School Homosexuality: From Plato's Academy to the Princeton Rub 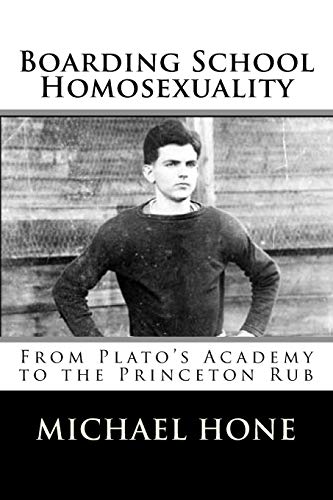 In writing this book I’m casting very large. Academies and Lyceums in Greece, home of the world’s most beautiful ephebes, Spartan barracks, schools and sexuality in Rome and how they compared with those of Ancient Athens. Renaissance communal life in artists’ workshops and ateliers, the boarding schools of the times, where, because girls were protected with Brinks-like security, boys whiled away the nights in virile couplings, the days in lewd gestures and lewder jokes. The golden age of boarding-school homosexuality was England of the 1800s and 1900s [Oxford, Cambridge, Harrow, Eton and others], which spilled over, homoerotically, into the Apostles and the Bloomsbury Set that I’ve treated in fully-illustrated detail, as well as the eroticism in today’s dormitories, the Princeton Rub an example. There is a full section on the erotic Greek and Roman texts professors used to excite the imaginations of the boys, laying the grounds for later private tutorials. Apprenticeships on vessels, the berths the ship’s dormitories, led to matelotage, male sexual liaisons and the trial of the century. Included within are the lives of the most supremely unique individuals to have lived: Plato, Aristotle, Alexander the Great, Lorenzo de’ Medici, da Vinci, Cellini, Byron, Rupert Brooke, Duncan Grant, Maynard Keynes, T.E. Lawrence, Caravaggio, Michelangelo--issued from various types of schools, men who have enriched us forever, men of genius who happened to have preferred other men. In order to place this book in the hands of students, it has been priced at the lowest sum permitted by the editors.

1. Boarding School Homosexuality: From Plato's Academy to the Princeton Rub

2. Boarding School Homosexuality: From Plato's Academy to the Princeton Rub