Articoli correlati a A Precarious Equilibrium: Human Rights and Détente... 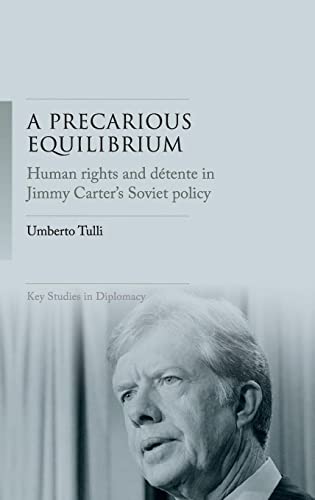 Descrizione libro MANCHESTER UNIVERSITY PRESS, United Kingdom, 2020. Hardback. Condizione: New. Language: English. Brand new Book. In January 1981, just days before Jimmy Carter left the White House, many of the president's officials were well satisfied with the administration's campaign to promote human rights. But as commentators, scholars, and the incoming president began to critique Carter's bipolar policy, it became clear that Carter had not only failed to persuade the American public that he had a clear grasp on the international role of the US, but he failed to build a lasting domestic consensus on foreign policy.The Carter administration aimed to renew its ideological challenge to the USSR through human rights and to persuade the Soviets to ease internal repression in order to strengthen Congressional support for detente and arms control. Contrary to what he envisioned, the more vigorously the White House pursued a pro-human rights agenda, the more the Soviets lost interest in detente; the more the administration relegated human rights to quiet diplomacy, the more critics within the United States accused the President of abandoning his commitment to human rights. In the end, the White House lost the opportunity to stabilise bipolar relations and the domestic support Carter had managed to garner in 1976. Critics of detente, helped by the Iran hostage crisis and the Soviet invasion of Afghanistan, defeated him.Based on recently declassified archival documents, A precarious equilibrium offers a fresh interpretation of President Jimmy Carter's human rights policy and its contradictory impact on US-Soviet affairs. -- . Codice articolo AAR9781526146021