Articoli correlati a Modern money-lending and the meaning of dividends....

Carpenter, Edward Modern money-lending and the meaning of dividends. By: Edward Carpenter

Modern money-lending and the meaning of dividends. By: Edward Carpenter 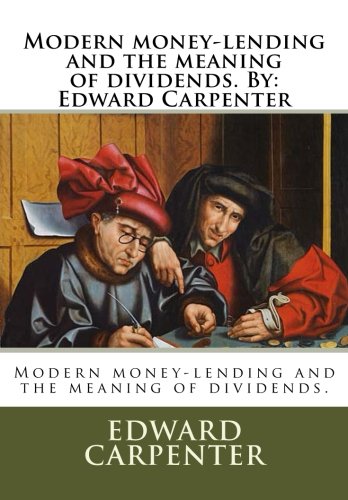 1. Modern Money-Lending and the Meaning of Dividends. by: Edward Carpenter (Paperback)

Descrizione libro Createspace Independent Publishing Platform, United States, 2016. Paperback. Condizione: New. Language: English. Brand new Book. Edward Carpenter (29 August 1844 - 28 June 1929) was an English socialist poet, philosopher, anthologist, and early LGBT activist. A poet and writer, he was a close friend of Rabindranath Tagore, and a friend of Walt Whitman. He corresponded with many famous figures such as Annie Besant, Isadora Duncan, Havelock Ellis, Roger Fry, Mahatma Gandhi, Keir Hardie, J. K. Kinney, Jack London, George Merrill, E. D. Morel, William Morris, Edward R. Pease, John Ruskin, and Olive Schreiner. As a philosopher he is particularly known for his publication of Civilisation, Its Cause and Cure in which he proposes that civilisation is a form of disease that human societies pass through. An early advocate of sexual freedoms, he had an influence on both D. H. Lawrence and Aurobindo, and inspired E. M. Forster's novel Maurice Born in Hove in Sussex, Carpenter was educated at nearby Brighton College where his father was a governor. His brothers Charles, George and Alfred also went to school there. When he was ten, he displayed a flair for the piano. His academic ability appeared relatively late in his youth, but was sufficient enough to earn him a place at Trinity Hall, Cambridge. Whilst there he began to explore his feelings for men. One of the most notable examples of this is his close friendship with Edward Anthony Beck (later Master of Trinity Hall), which, according to Carpenter, had "a touch of romance." Beck eventually ended their friendship, causing Carpenter great emotional heartache. Carpenter graduated as 10th Wrangler in 1868. After university he joined the Church of England as a curate, "as a convention rather than out of deep Conviction." In 1871 he was invited to become tutor to the royal princes George Frederick (late King George V) and his elder brother, Prince Albert Victor, Duke of Clarence, but declined the position. The job instead went to his lifelong friend and fellow Cambridge student John Neale Dalton. Carpenter continued to visit Dalton while he was tutor, and was presented with photographs of themselves by the princes. Codice articolo APC9781535080545

2. Modern Money-Lending and the Meaning of Dividends. by

3. Modern Money-Lending and the Meaning of Dividends. by: Edward Carpenter

4. Modern Money-Lending and the Meaning of Dividends. by