Articoli correlati a Staging Growth: Modernization, Development, and the... 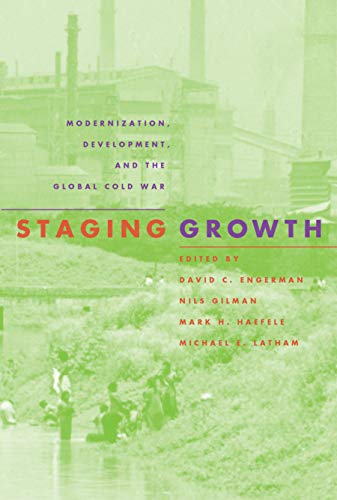 Beginning in the 1950s, the theory of modernization emerged as the dominant paradigm of economic, social, and political development within the American foreign policy establishment. Purporting to explain the stages through which all nations pass on the road to industrial modernity, it provided a rationale for a broad range of cultural and political projects aimed at fostering Third World growth while simultaneously combating communism.

But modernization theory was more than simply an expression of Cold War ideology. As the essays in this volume show, the ideal of modernization proliferated throughout the postcolonial world and across ideological lines in places as diverse as East Asia, Southern Africa, and South Asia. Indeed, it was embraced by all who shared the American enthusiasm for the increased production and higher standards of living promised by industrialization -enemies and allies alike.

Situating modernization theory historically, Staging Growth avoids conventional chronologies and categories of analysis, particularly the traditional focus on conflicts between major powers. The contributors employ a variety of approaches-from economic and intellectual history to cultural criticism and biography-to shed fresh light on the global forces that shaped the Cold War and its legacies. Most of the pieces are comparative, exploring how different countries and cultures have grappled with the implications of modern development. At the same time, all of the essays address similar fundamental questions. Is modernization the same thing as Westernization? Is the idea of modernization universally valid? Do countries follow similar trajectories as they undertake development? Does modernization bring about globalization?