Articoli correlati a The Student's Guide to VHDL

The Student's Guide to VHDL 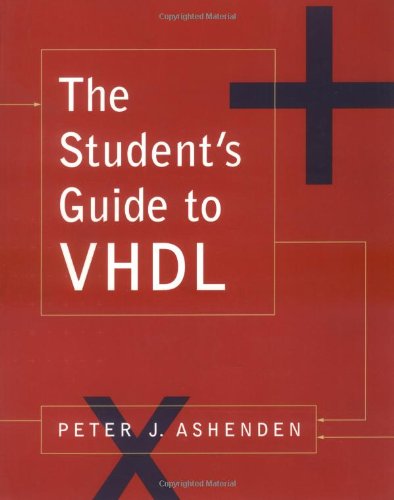 VHDL is a language for describing digital electronic systems. A vital, efficient step in the system design process, VHDL allows for the design and simulation of a hardware system prior to it actually being manufactured.
This new book provides a tutorial
introduction to the fundamental modeling features of VHDL and shows how the features are used for the design of digital systems.

Offering the same clear, accessible style as The Designer's Guide to VHDL, The Student's Guide is designed as a main text for introductory VHDL courses, and as a supplementary text for courses that require VHDL-based project work, such as computer architecture, digital design, and digital logic courses. This new condensed text also serves as a quick, self-teaching guide for practicing engineers who need to learn only the basics of VHDL.

* On-line resources include code for case studies.
* Numerous exercises that are coded for difficulty and expected solution time. * Solutions to the level one exercises are included in the book for self-testing.
* An appendix citing the differences between the 1987 standard and the 1993 standard which is described in the book.

Peter J. Ashenden received his B.Sc.(Hons) and Ph.D. from the University of Adelaide, Australia. He was previously a senior lecturer in computer science and is now a Visiting Research Fellow at the University of Adelaide. His research interests are computer organization and electronic design automation. Dr. Ashenden is also an independent consultant specializing in electronic design automation (EDA). He is actively involved in IEEE working groups developing VHDL standards, is the author of The Designer's Guide to VHDL and The Student's Guide to VHDL and co-editor of the Morgan Kaufmann series, Systems on Silicon. He is a senior member of the IEEE and a member of the ACM.

1. The Student's Guide to VHDL (Systems on Silicon)