Articoli correlati a Sharing Nature: Nature Awareness Activities for All... 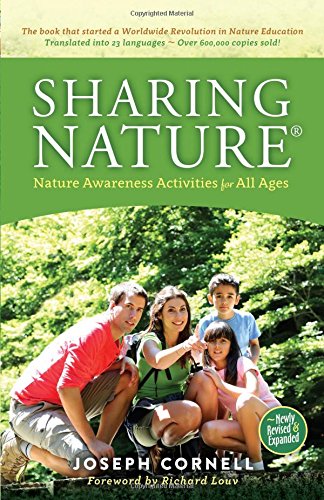 A guide to nature education with games and activities designed to stimulate attention, observation, curiosity, and imagination.

Joseph Cornell is an internationally renowned author and founder of Sharing Nature Worldwide, one of the planet's most widely respected nature awareness programs. His first book, Sharing Nature with Children, “sparked a worldwide revolution in nature education” and has been published in twenty languages and sold half a million copies. He is the honorary president of Sharing Nature Association of Japan, which has 10,000 members and 35,000 trained leaders.

Mr. Cornell is the author of the Sharing Nature Book Series, used by millions of parents, educators, naturalists, and youth and religious leaders all over the world. Mr. Cornell's books, Listening to Nature and The Sky and Earth Touched Me, have inspired thousands of adults to deepen their relationship with nature.

The U.S. Fish & Wildlife Service selected Mr. Cornell's Sharing Nature with Children as one of the fifteen most influential books published since 1890 for connecting children and families to nature. His highly effective outdoor learning strategy, Flow Learning™, was featured by the U.S. National Park Service as one of five recommended learning theories, along with the works of Maria Montessori, Howard Gardner, John Dewey, and Jean Piaget.

Mr. Cornell has received many international awards for his Sharing Nature books and work. He received the prestigious Countess Sonja-Bernadotte Prize in Germany for his vast influence on environmental education in Central Europe. In 2011 Cornell was selected as one of the world's “100 most influential opinion leaders committed to the Environment” by the French organization, Les Anges Gardiens de la Plančte.

Along with Jane Goodall and David Attenborough, Joseph Bharat Cornell is an Honorary Member of the Hungarian Society of Environmental Education.

Known for his warmth and joyful enthusiasm, Cornell “has a genius for finding the essence of a subject, explaining it in clear and compelling ways, and then giving the reader creative exercises to gain an actual experience.”

Joseph and his wife, Anandi, are senior ministers and residents of Ananda Village in Northern California.