Articoli correlati a Design For Life: The Architecture Of Sim Van Der Ryn

Design For Life: The Architecture Of Sim Van Der Ryn 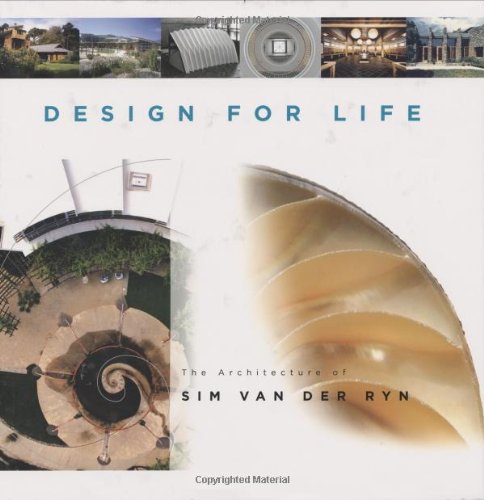 Design for Life: The Architecture of Sim Van der Ryn surveys the work and principles of Sim Van der Ryn, a world leader in the field of sustainable architecture. Sharing his years of experience as a teacher and using his building designs as examples, the author shows us that buildings are not objects but organisms, and cities are not machines but complex ecosystems.< BR>

Design for Life: The Architecture of Sim Van der Ryn surveys the work and principles of Sim Van der Ryn, one of the world's most important leaders in the field of sustainalbe architecture. Sharing his years of experience as a teacher and using his building designs as examples, the author shows us that buildings are not objects but organisms, and cities are not machines but complex ecosystems.Fleeing Holland just weeks before Hitler's invasion, the Van der Ryn family settled in the outskirts of New York City. Young Sim grew up exploring the tiny pockets of grass, puddles, and swamps he found in Queens. An avid high school art student, he progressed to studying architecture in college. But he found the pervading modernist-style buildings to be emotionally cold and lacking human sensitivity. He longed for a way to restore architecture back to life. His breakthrough came during the frequent campus visits of R. Buckminster Fuller, who inspired him to think and design with the geometries of the natural world.Design for Life shows how the young architect began to look at the world with new eyes and saw the shifting patterns in nature and how these patterns profoundly affect how we live and work in the structures we build. Using his own projects and teaching experiences as examples, the author reveals the evolution of his thinking and the emergence of a new process of collaborative design that honors the buildings' users and connects them to the Earth. The book shows how architecture has created physical and mental barriers that separate us from our world, but how we can recover the soul of architecture and reconnect with our natural surroundings.Sim Van der Ryn is the president of Van der Ryn Architects, a Northern California firm known for its work in sustainable architecture. He taught architecture and design at the University of California, Berkeley, for over 30 years, inspiring a new generation to create buildings and communities that are sensitive to place, climate, and the flow of human interactions. Appointed California State Architect in the 1970s by then-Governor Jerry Brown, Van der Ryn introduced the nation's first energy-efficient government building projects. His vision and persuasive skills heralded a golden age of ecologically sensitive design and resulted in the adoption of strict energy standards and disability access standards for all state buildings and parks.As the author of six groundbreaking books about planning and design, including Sustainable Communities (1986, with Peter Calthorpe), Ecological Design (1996, with Stuart Cowan) and numerous articles, Van der Ryn has helped inspire architects to see the myriad ways they can apply physical and social ecology to architecture and environmental design. The author lives and works in Northern California, across the Golden Gate Bridge from San Francisco.

Somewhere in the last century, architecture lost its soul. Modern culture developed the wealth, the power, and the technology to create structures that once seemed impossible. While the larger-than-life skyscrapers and the coldly post-modern structures of our time do inspire a detached sense of awe and wonder, very few appear to have qualities that truly move us...
When was the last time you were moved to tears by a building, or did not want to leave a building you were in because the place touched you at such a deep level? When was the last time you shivered, ecstatic, in a manmade place that tugged at something deep inside of you?
Buildings are not objects; they are organisms. Cities are not mechanical assemblies; they are ecosystems. Through ecological design, our buildings and cities can become more fully integrated with nature. Like organisms, they can produce their own energy, and consume and recycle their own wastes without polluting. Design can show use the connection between nature's cycles, the living and the built environment...
Our global crisis is also a design crisis as civilization shifts from design processes and products formed in the image of the machine to design based on the forms and processes of the intricately ordered web of life. I lay out the characteristics of the emerging integral worldview and integral design. As Gandhi said, "We must be the change we want to see." This is the essence of actively living with hope.
--Sim Van der Ryn

2. Design For Life: The Architecture of Sim Van der Ryn

4. Design For Life: The Architecture Of Sim Van Der Ryn

5. Design For Life: The Architecture of Sim Van der Ryn

6. Design For Life: The Architecture of Sim Van der Ryn

7. Design For Life: The Architecture of Sim Van der Ryn