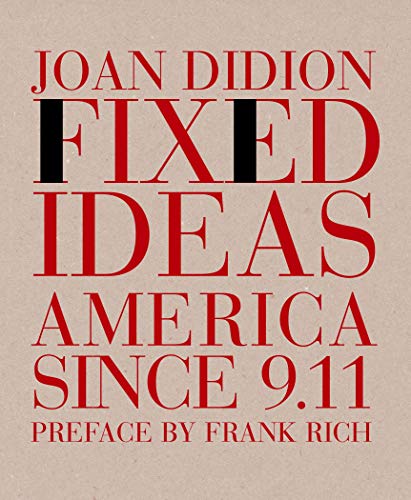 In Fixed Ideas Joan Didion describes how, since September 11, 2001, there has been a determined effort by the administration to promote an imperial America—a "New Unilateralism"—and how, in many parts of America, there is now a "disconnect" between the government and citizens.

"[Americans] recognized even then [immediately after 9/11], with flames still visible in lower Manhattan, that the words 'bipartisanship' and 'national unity' had come to mean acquiescence to the administration's preexisting agenda—for example the imperative for further tax cuts, the necessity for Arctic drilling, the systematic elimination of regulatory and union protections, even the funding for the missile shield."

Frank Rich in his preface notes: "The reassuring point of the fixed ideas was to suppress other ideas that might prompt questions or fears about either the logic or hidden political agendas of those conducting what CNN branded as 'America's New War.'"

He adds, "This White House is famously secretive and on-message, but its skills go beyond that. It knows the power of narrative, especially a single narrative with clear-cut heroes and evildoers, and it knows how to drown out any distracting subplots before they undermine the main story."

Joan Didion is the author of the novels Run River, Play It as It Lays, A Book of Common Prayer, Democracy, and The Last Thing He Wanted. Her nonfiction includes Slouching Towards Bethlehem, The White Album, Salvador, Miami, After Henry, and Political Fictions.

Frank Rich is a writer-at-large for New York magazine. His books include Ghost Light, a memoir, and The Greatest Story Ever Sold: The Decline and Fall of Truth in Bush’s America. He is an Executive Producer of the HBO series Veep.