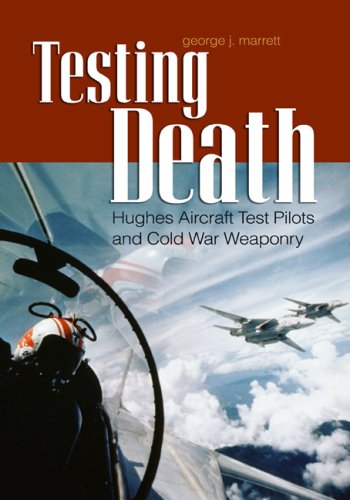 In 1969, after his return from Vietnam, George Marrett took a job as a test pilot at Hughes Aircraft. For twenty years, he tested the most sophisticated airborne radar and missiles ever designed for advanced Navy and Air Force aircraft. Marrett's masterful command of storytelling puts the reader in the cockpit during the F-15, F-16, and F-18 weapons systems flyoff, as well as during the firing of a Mach 3 Phoenix missile from an F-14A Tomcat at a Soviet MiG Foxbat target. In addition to the weaponry, Marrett relives stories of espionage, deadly crashes, and the development of the B-2 Spirit stealth bomber radar. He combines the thrill of test flying with the pathos, humor, and tragedy that is the everyday life of a test pilot, showing how the Cold War was actually won in the skies above Southern California. The background to Marrett's tale is the story of Hughes Aircraft. While Howard Hughes's huge and unwieldy Spruce Goose never made it into World War II, the Radio Department he started grew to become the electronics giant Hughes Aircraft Company. By the 1950s, Hughes Aircraft built airborne radar and missiles for all of the Air Force interceptors stationed on the East and West Coasts and along the border with Canada to defend the United States from Soviet bombers. In the years that followed, the company built airborne radar for the Navy F-14A Tomcat, the Air Force F-15A Eagle, the Navy F-18A Hornet and the B-2 stealth bomber. They also built the Navy air-to-air AIM-54 Phenix and the Air Force air-to-ground AGM-65 Maverick missiles. These advanced electronic weapons were developed and fielded during President Reagan's massive buildup of military might. Even though Hughes himself did not live to see the Berlin Wall fall in 1989, the company he built made an essential contribution to the collapse of communism.

There has been no finer way of learning what happened throughout aviation history than by having the story told by one who was there. While numerous aviation writers are pilots who 'put you right into the cockpit,' author and long-time WINGS & AIRPOWER contributor George Marrett chooses to put the reader right into history itself by weaving colorful tales of his aerial exploits or those of people who touched the very history he writes about. Having flown as both an Air Force test pilot and combat pilot in Southeast Asia before being hired as a civilian test pilot for the Hughes Aircraft Company, Marrett takes his readers on a journey back in time....How fortunate he was to have been able to partake of all that history, and how fortunate we are to now be able to read all about it. It is classic aviation storytelling at its best! --Airpower

GEORGE J. MARRETT served in the U.S. Air Force and flew the F-86L SabreJet, the F-101B Voodoo, and the Douglas A-1 Skyraider, this last as a Sandy rescue pilot in the 602nd Fighter Squadron (Commando) in Thailand, completing 188 combat missions in Southeast Asia during the Vietnam War. Currently, he flies his 1945 Stinson L-5E Sentinel for air shows. He is the author of Cheating Death: Combat Air Rescues in Vietnam and Laos and Howard Hughes: Aviator.