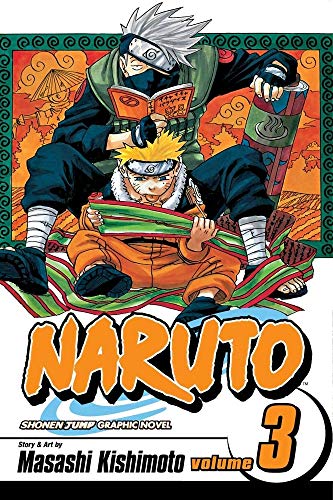 While they recover from their injuries, Kakashi puts Naruto, Sasuke, and Sakura on a strict training regimen to protect Tazuna's family against Zabuza's next attack. But Zabuza has a dangerous new apprentice in Haku. And as the bridge comes closer to completion, our heroes must be willing to kill - or die.

'With a richly detailed background, complex, sympathetic characters, superb action and a main character who somehow balances tragedy with comedy, this is a series that delivers in every way. So strap on your leaf headband and join the oddest ninja in town. You won't regret it. 4/5' NEO magazine

Masashi Kishimoto made his debut in Weekly Shonen Jump in 1999 with Naruto, which became a big hit with both boys and girls. Kishimoto added a modern flavour to the ancient world of Japanese ninja to make Naruto one of the most popular series in Japan.

Descrizione libro Viz Media, Subs. of Shogakukan Inc, United States, 2007. Paperback. Condizione: New. Kishimoto, Masashi (illustratore). Language: English. Brand new Book. Naruto is a ninja-in-training with a need for attention, a knack for mischief, and sealed within him, a strange, formidable power. His antics amuse his instructor Kakashi and irritate his teammates, intense Sasuki and witty Sakura, but Naruto is serious about becoming the greatest ninja in the village of Konohagakure!Zabuza, the ninja assassin, was stopped from his first try at killing Tazuna the bridgebuilder - but Zabuza still lives! While the ninjas recover from their injuries, Kakashi puts Naruto, Sasuke and Sakura on a strict training regimen to protect Tazuna's family - including Tazuna's embittered grandson Inari - and prepare for Zabuza's next attack. But the next time won't be as easy, because joining Zabuza is his apprentice, Haku. And as the bridge comes closer to completion, our heroes must be willing to die - or kill - to protect the ones they love. Codice articolo AA89781591161875