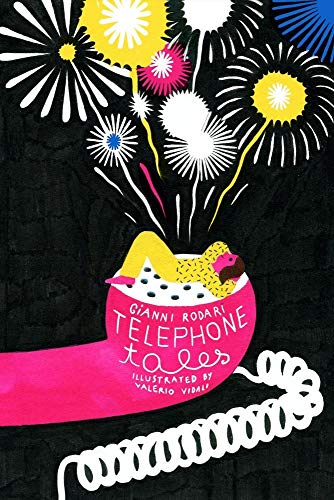 Reminiscent of Scheherazade and One Thousand and One Nights, Gianni Rodari’s Telephone Tales is many stories within a story. Every night, a traveling father must finish a bedtime story in the time that a single coin will buy. One night, it’s a carousel that adults cannot comprehend, but whose operator must be some sort of magician, the next, it’s a land filled with butter men who melt in the sunshine! Awarded the Hans Christian Anderson Award in 1970, Gianni Rodari is widely considered to be Italy’s most important children’s author of the 20th century. Newly re-illustrated by Italian artist Valerio Vidali? (The Forest)?, Telephone Tales? entertains, while questioning and imagining other worlds.

L'autore:
Gianni Rodari (1920-1980) is widely considered to the most influential Italian children’s author of the 20th century. Despite winning the Hans Christian Anderson Award in 1970, Rodari has rarely been translated into English.

Valerio Vidali is an Italian illustrator of children's books. His book Jemmy Button (Templar/Candlewick, 2013), co-authored with Jennifer Uman, was a New York Times Best Illustrated Book of 2013. His book The ?Forest, co-illustrated with Violeta Lopíz was published by Enchanted Lion in 2018.
Antony Shugaar is a writer and translator, working out of Italian and French. He once interviewed the creator of Topo Gigio.

Descrizione libro Hardback. Condizione: New. Valerio Vidali (illustratore). Language: English. Brand new Book. Every night, at nine o'clock, wherever he is, Mr. Bianchi, an accountant who often has to travel for work, calls his daughter and tells her a bedtime story. But since it's still the 20th century world of pay phones, each story has to be told in the time that a single coin will buy.Reminiscent of Scheherazade and One Thousand and One Nights, Gianni Rodari's Telephone Tales is composed of many stories--in fact, seventy short stories, with one for each phone call. Each story is set in a different place and a different time, with unconventional characters and a wonderful mix of reality and fantasy. One night, it's a carousel so beloved by children that an old man finally sneaks on to understand why, and as he sails above the world, he does. Or, it's a land filled with butter men, roads paved with chocolate, or a young shrimp who has the courage to do things in a different way from what he's supposed to do.Awarded the Hans Christian Anderson Award in 1970, Gianni Rodari is widely considered to be Italy's most important children's author of the 20th century. Newly re-illustrated by Italian artist Valerio Vidali (The Forest), Telephone Tales entertains, while questioning and imagining other worlds.Winner of the 2021 Batchelder Award and the 2020 Italian Ministry of Foreign Affairs's English Translation Prize. Codice articolo AAZ9781592702848