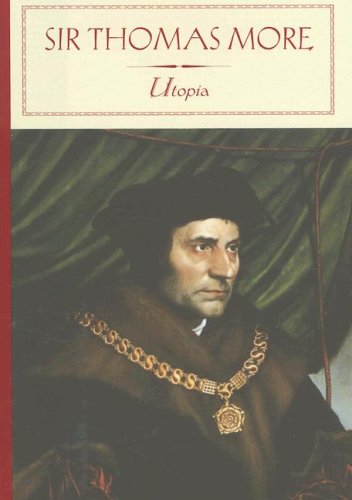 Utopia, by Sir Thomas More, is part of the Barnes & Noble Classics series, which offers quality editions at affordable prices to the student and the general reader, including new scholarship, thoughtful design, and pages of carefully crafted extras. Here are some of the remarkable features of Barnes & Noble Classics: New introductions commissioned from today's top writers and scholars Biographies of the authors Chronologies of contemporary historical, biographical, and cultural events Footnotes and endnotes Selective discussions of imitations, parodies, poems, books, plays, paintings, operas, statuary, and films inspired by the work Comments by other famous authors Study questions to challenge the reader's viewpoints and expectations Bibliographies for further reading Indices & Glossaries, when appropriateAll editions are beautifully designed and are printed to superior specifications; some include illustrations of historical interest. Barnes & Noble Classics pulls together a constellation of influences—biographical, historical, and literary—to enrich each reader's understanding of these enduring works.

One of the most influential books in the Western philosophical and literary tradition, Sir Thomas More’s Utopia appeared in 1516. The formidable Henry VIII had recently assumed the throne in England, and conflicting ideas about religion were fueling the Reformation throughout Europe. A scathing satire, Utopia was hugely successful and vaulted More to the forefront of the growing humanist movement.
The story of Utopia is told by a mysterious sailor named Raphael Hythloday, who travels to the New World with the Italian explorer Vespucci and remains at a fort built at the farthest point reached. From there, he discovers a strange island kingdom named Utopia, a pagan and communist city-state in which language, social customs, dress, architecture, and education are identical throughout the country’s fifty-four cities. The Utopians have eliminated wealth, the nobility, and currency. Labor and goods are distributed equally and property is held in common. And there are no monasteries, alehouses, or academies to tempt a person to withdraw from society.
Given More’s satiric leanings and eventual execution, is Utopia simply an attack on Europe’s wickedness? Or is it a philosophical tract extolling the ideal way to live? Ultimately, Utopia navigates a course between the desire to create perfection and the pragmatic understanding that perfection, given the fallibility of mankind, is impossible.

Wayne A. Rebhorn is Celanese Centennial Professor of English at the University of Texas at Austin. He has written extensively on Renaissance literature in English, Italian, French, Spanish, and Latin, on authors from Boccaccio through More and Shakespeare down to Milton.

Wayne A. Rebhorn is Celanese Centennial Professor of English at the University of Texas at Austin. He has written extensively on Renaissance literature in English, Italian, French, Spanish, and Latin, on authors from Boccaccio through More and Shakespeare down to Milton.