Articoli correlati a My Best Friend's Exorcism: A Novel

My Best Friend's Exorcism: A Novel 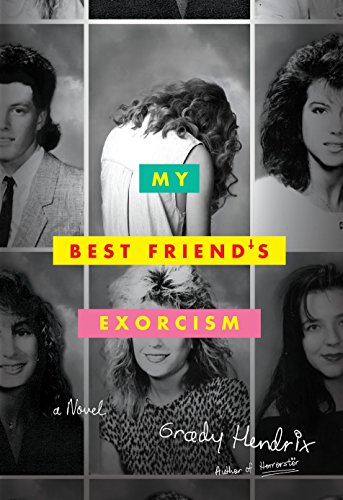 An unholy hybrid of Beaches and The Exorcist that blends teen angst, adolescent drama, unspeakable horrors, and a mix of ’80s pop songs into a pulse-pounding supernatural thriller

The year is 1988. High school sophomores Abby and Gretchen have been best friends since fourth grade. But after an evening of skinny-dipping goes disastrously wrong, Gretchen begins to act...different. She’s moody. She’s irritable. And bizarre incidents keep happening whenever she’s nearby. Abby’s investigation leads her to some startling discoveries—and by the time their story reaches its terrifying conclusion, the fate of Abby and Gretchen will be determined by a single question: Is their friendship powerful enough to beat the devil?

“Take The Exorcist, add some hair spray and wine coolers, and enroll it in high school in 1988 — that'll give you My Best Friend's Exorcism... Campy. Heartfelt. Horrifying.”—Minnesota Public Radio

“It’s clever, heartfelt, and get-under-your-skin unnerving without succumbing to any of the more predictable exorcism story tropes — things happen in this book that you will not expect. It will leave you sleepless because you won’t want to put it down, and you’ll be too scared to.”—Fangoria

“If you’re looking for a good summer book, something for the beach or the back porch that won’t insult your intelligence, one that’s tense and sometimes scary and sometimes funny, with characters you may even come to like and admire as they come of age, keep My Best Friend’s Exorcism in mind.”—SFFWorld

“Grady Hendrix’s terrific new novel...places best friend drama front and center, and wrings honest truths from the fictional magic.... Sharply written...Hendrix has made strong progress as a novelist, and this book...makes a convincing case for his powers as a sharp observer of human behavior, filtered through a fun genre conceit that doesn’t skimp on the spooky—or the bodily fluids.”—The A.V. Club

“From books to B-movies, horror has proven itself a particularly fun genre to mess with, and when you want more than just a fright it might be time to seek out the truly strange and unusual”—BookRiot

“Grady Hendrix once again mixes a traditional trope of horror fiction with pop culture, satirical humor, and a dollop of teenage angst...Told with Hendrix’s blend of sardonic humor and frightening dread, this is one scary tour down memory lane.”—Library Journal

“Hendrix was outrageously inventive with his debut novel (Horrorstцr, 2014) and continues his winning streak with a nostalgic (if blood-soaked) horror story to warm the hearts of Gen Xers.... anyone interested in seeing William Peter Blatty's infamous The Exorcist (1971) by way of Heathers shouldn't miss it.”—Kirkus Reviews

“From the author of the acclaimed Horrorstцr, this book packs all the magic of a summer horror flick.”—Bustle

“[Hendrix proves his] own black-magic mettle by conjuring up an era where ill-informed paranoia (and just plain ding-dongness) turned some of the quietest corners of America into fear factories, full of deep-rooted distrust and misspent rage. Too bad Satan never actually did show up back then. He woulda loved it.”—Wired.com

“A book every horror fan should know.”—Dread Central

“If The Exorcist had been authored by Tina Fey instead of William Peter Blatty, it might have borne an uncanny resemblance to what Grady Hendrix has accomplished with My Best Friend’s Exorcism...Fans of satire, nostalgia, dark comedy and, well, demons should read this book.”—BookPage

“Grady Hendrix made a splash in 2014 with his inventive debut novel, Horrorstor, which was among my favorite books of the year.... In his new book...Hendrix again merges two genres: a Generation X, memoir-ish coming of age tale and a scary take on William Peter Blatty's The Exorcist. The result is remarkably successful.”—The Oklahoman

“diabolically gleeful (and wholly original) entry in something of a new wave of possession tales. . . . one of the most unique reads of 2016.”—New York Journal of Books

“My Best Friend's Exorcism possesses you with that perfect 80s horror vibe from sentence one and doesn't let go until the truly moving ending. A great mixture of nostalgia and terror ­­ If only Wes Craven was still around to film this!”—Fred Van Lente, author of the Action Philosophers and The Amazing Spider­Man

“A riveting and poignant story of an enduring friendship. I'll admit it, I got a little weepy! But don't worry, there's plenty of good, clean, horror fun.”—Sarah Langan, author of Audrey’s Door

“A huge win. It works as an exorcism thriller but feels like more than that, steeped in that particular coming ­of­ age sadness, feverishness, and joy.”—Austin Grossman, author of Soon I Will Be Invincible and You: A Novel

“Fast-paced and witty, the novel balances moments of true horror with a portrait of true friendship and the lengths to which one friend will go for another.”—John Langan, author of House of Windows and Mr. Gaunt and Other Uneasy Encounters

“Everything you’ve ever loved about the brat pack, seems to be included in this book, with a bunch of vomit and blood for good measure...highly recommended to the max.”—Geeks of Doom

“Hendrix knows [the Charleston] landscape well and renders it brilliantly, with hilarious jabs at private school elitism and Charleston’s pretension, but that’s just the low hanging figs and loquats. What Hendrix really nails is the banter, the drama and heartbreaking reality of what it’s like to be 14 and have your best friend turn on you. His dialogue doesn’t miss a teen beat, and his pacing is swift and swirling, using flashbacks and foreshadowing with expert finesse.”—The Post and Courier

“My Best Friend’s Exorcism by Grady Hendrix is an inventive, darkly funny horror novel...sure to tug on the heartstrings of Gen-X’ers, but with nuanced character writing and solid storytelling, Hendrix will exceed expectations for a silly ‘80s flashback.... Satirical, intense and surprisingly heartwarming, My Best Friend’s Exorcism is, like, totally the perfect summer reading choice—if you don’t mind some gore.”—Sunday Gazette-Mail

“[Hendrix] took a tried-and-true trope – the demonic possession story – and used his colorfully visual storytelling to put it within the context of something commonplace...[he] continues to find magic and malevolence in the most mundane areas of life...”—The Horror Section

“Smart, sassy and satanic. . . Hendrix’s sophomore effort channels the poison-clique satire of classics such as Heathers and imbues his story with the infernal revisionist energy of more contemporary fare like House of the Devil and The Last Exorcism.”—Rue Morgue

“Teenage girls, cliques, the ‘80s and demonic possession — it all comes together to tell a story of the healing power of friendship.”—The Joplin Globe

“This is one of my new favorites...It’s about the best things in the eighties, demonic possession, [with] some dark comedy mixed in there too.”—Angelo Santini, McLean & Eakin Booksellers

“This is one of those delightful novels where, while it's written in third person, the reader feels so connected to the main character it is at times jarring when you realize she isn't telling you the story directly.”—April Gosling, Boulder Bookstore

“... a hilarious and biting look at high school female friendships that is akin to Buffy Summers and her supernatural-filled high school experiences.”—Whatsheread, Paper Blog

“This goofy, spooky, surprisingly touching novel by the author of the amazing Horrorstцr...hit just the right spot for me this week. It’s an entertaining, light read that also contains moments of horror, deeply icky things, and a descent into either madness or evil, depending on how you look at it.”—Bookshelf Fantasies

“Grady Hendrix incorporates plenty of snark into the scenes as well as numerous 80s pop culture references (each chapter title is a song title) which keep the tone light even as Gretchen torments her friends and family. The writing is superb, but it’s the strength of Abby’s character that really makes the plot work.”—Nicole, Book Blogger for My Book Views

“This is Hendrix's second book, after the Ikea-scary-story Horrorstцr, and once again, he's created a horror novel that's both creepy and full of fun.... Like Heathers on steroids, it's well worth a read.”—University City Public Library Book Challenge

“Hendrix plays through the usual issues of adolescence—drug use, dating, the social pecking order—but with the supernatural twist that the forces at work are not just the evils of growing older but actual Evil....My Best Friend’s Exorcism feels like a John Hughes film starring Buffy the Vampire Slayer (but without any vampires).”—Katie H., Madison Public Library

“The level of description Hendrix uses to portray Gretchen’s experience is absolutely chilling. I thought I’d seen/read it all with The Exorcist.  I was taken back to the first time I watched the movie, read the book. And I was absolutely terrified.... Much like all great horror, the fact that it could scare me so makes me love it even more! Just like his previous book, My Best Friend’s Exorcism exceeds at proving the horrific can exist in the most mundane and normal of settings.”—Jenn’s Bookshelves

“Hendrix brings back his flare for horror and gore and adds a touch of 80’s culture in this creepy new read.”—Milliebot Reads

“If you liked Horrorstor, you’re really going to dig this one.... the perfect gift for a high school student whose summer vacation is almost here. Or really, for anyone who wants to get some chills down their spine while reading on the beach.”—Sarah Says Read

“I loved this.... Grady Hendrix very much ups his game here and makes you grab your face with alternating bouts of happiness and anxiety.... All the characters are written wonderfully. Abby and Gretchen's friendship is real and vivid and believable, and I loved spending time with all of them.”—Reading Rambo

“When you want a book that takes you back to the Breakfast Club and doesn’t take itself too seriously pick up My Best Friend’s Exorcism.”—Gun in Act One

“My Best Friend’s Exorcism was a captivating horror novel. I recommend it if you’re looking for something as creepy as it is interesting.”—Read.Sleep.Repeat.

“Great for anyone familiar with the intensity of adolescent friendships...My Best Friend’s Exorcism is a quick and fun read.”—Between the Covers

“I think Grady Hendrix is my new favorite author.... An amazing read that I could not put down!”—Book Mama

Grady Hendrix is a novelist and screenwriter based in New York City. His novels include Horrorstör, named one of the best books of 2014 by National Public Radio, and My Best Friend’s Exorcism, for which the Wall Street Journal dubbed him “a national treasure.” The Bram Stoker Award-winning Paperbacks from Hell, his survey of outrageous horror novels of the 1970s and 80s, was called “pure, demented delight” by the New York Times Book Review. He’s contributed to Playboy, The Village Voice, and Variety.

My Best Friend's Exorcism: A Novel