Articoli correlati a Godzilla: The Art of Destruction

Godzilla: The Art of Destruction 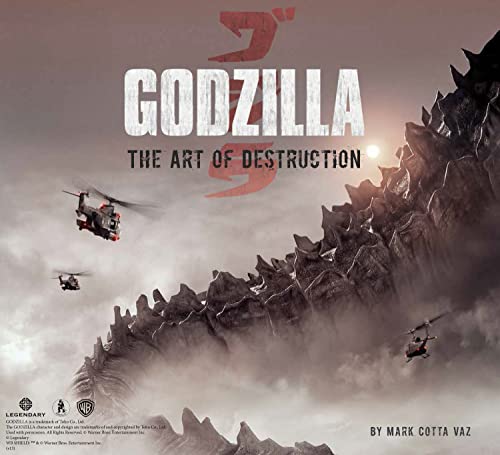 Published to coincide with the release of Warner Bros. and Legendary’s Godzilla, directed by Gareth Edwards, this visually stunning book presents an extraordinary new vision for the beloved character through a dynamic selection of concept illustrations, sketches, storyboards, and other pre-production materials. Godzilla: The Art of Destruction is the definitive book on one of the most anticipated films of 2014. Featuring interviews with the director and key crew and cast members, the book tells the complete story of the making of Godzilla from concept to final frames. Comprehensive and enthralling, Godzilla: The Art of Destruction is a book that no fan will want to be without.

richly detailed and a must-have for Godzilla fans.”
—Examiner

brings the Kaiju to your coffee table a beautifully designed book a must for die-hard fans of Godzilla and film buffs alike.”
—Geekadelphia

a giant, beautiful book that would be equally at home on a coffee table or on a shelf alongside other textbooks on how movies are made. The people at Insight Editions always impress with the quality of what they do, and this grand, exhaustive title is no exception.”
Tech Times

Whether you want to read and see images of cut scenes (such as the Godzilla and MUTO fight at sea) or want to get more in depth information about the MUTO and Godzilla’s history, it’s all here.”
DVD Corner

one of the most handsomely designed and published behind-the-scenes movie art books I’ve ever seen.”
Film Edge.net

It honestly doesn't matter if you liked the film or not. Anyone who loves movie art books will want to add this one to the shelf. It's a little piece of movie history all on its own. You'll even discover a removable poster tucked away in the back.”
Mania

Without a doubt this is a book that speaks to both collectors and fans of the movie.”
Geek Native

" The book's as lavishly produced as you'd expect, and offers a veritable goldmine of stuff for movie geeks or fans of design in general.”
Den of Geek

this book is a must-have for fans of the Toho legend, the movie making process or simply those of you who just appreciate awesome.”
Moviepilot

this is an impressive hardcover coffee-table book that immediately asserts itself as a must-have book for any Godzilla enthusiast.”
Godzilla News

On its own, the concept art is often beautiful, suitable for framing (if it could be printed and framed, that is), while the storyboards offer the kind of insight burgeoning filmmakers or fans of the production process will eagerly embrace. The photos, a mix of behind-the-scenes photos with the occasional greenscreen in the background, and set photos nearly identical to shots taken from the final film, offer additional production insights Ultimately, readers of Godzilla: The Art of Destruction will come away from reading the book with the recognition of the massive complexity behind a production like Godzilla. Edwards and his creative team accounted for practically every detail before, during, and after production.”
Screen Invasion

Each page seems to be carefully put together to create a stunning mix of information, photography and art. Top that of with a director like Gareth Edwards who has become a fan favorite within the fandom of Godzilla, his introduction in the book will more than likely make this book a coveted item for Godzilla collectors For its size it packs as much power as Godzilla’s nuclear breath.”
Universe G

among all of the interviews with the cast and creative team on the film, it also features a series of early, rejected designs for Godzilla. Several images are accompanied by comments from Godzilla director Gareth Edwards regarding the reasons the designs were rejected.”
Digital Trends

an exhaustive look the production process by way of on-set photography, storyboards and, best of call, concept art, the book features a centerpiece spread that readers can fold out that contains various designs for Godzilla.”
Coming Soon

This awesome tome looks at the making of Gareth Edwards' film hitting theaters this Friday and, within, you'll find an exhaustive look the production process by way of on-set photography, storyboards and, best of call, concept art.”
Shock Til You Drop

The book delves into the making of Warner Bros. and Legendary’s Godzilla with concept illustrations, sketches, and storyboards, and is perfect for fans of big, scaly monsters who have all the feels.”
TOR.com

chronicles the making of Godzilla from its conception to the final product. If you’re excited to see Godzilla this weekend (and we know you are), you’ll want to get your claws on this bad boy.”
Nerdist

Art of Destruction provides a glimpse at how the filmmakers envisioned the chaos and devastation they wanted their film to encompass. From what we’ve seen from the finished product, they did a hell of a job translating the ideas from page to screen. Even the cover of this book is freaking epic.”
Giant Freakin Robot

Mark Cotta Vaz is a New York Times best-selling author with more than 25 published books, including the critically acclaimed Living Dangerously: The Adventures of Merian C. Cooper, Creator of King Kong, a TLA finalist selection. His "making of" books include Godzilla: The Art of Destruction and Interstellar: Beyond Time and Space.

1. Godzilla: The Art of Destruction

2. Godzilla: The Art of Destruction

3. Godzilla: The Art of Destruction

4. Godzilla: The Art of Destruction