Articoli correlati a The Queue 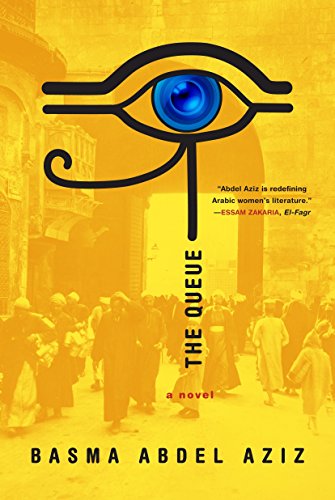 "The Queue ... has drawn comparisons to Western classics like George Orwell’s 1984 and The Trial by Franz Kafka. It represents a new wave of dystopian and surrealist fiction from Middle Eastern writers who are grappling with the chaotic aftermath and stinging disappointments of the Arab Spring." -- The New York Times

In a surreal, but familiar, vision of modern day Egypt, a centralized authority known as ‘the Gate’ has risen to power in the aftermath of the ‘Disgraceful Events,’ a failed popular uprising. Citizens are required to obtain permission from the Gate in order to take care of even the most basic of their daily affairs, yet the Gate never opens, and the queue in front of it grows longer.

Citizens from all walks of life mix and wait in the sun: a revolutionary journalist, a sheikh, a poor woman concerned for her daughter’s health, and even the brother of a security officer killed in clashes with protestors. Among them is Yehia, a man who was shot during the Events and is waiting for permission from the Gate to remove a bullet that remains lodged in his pelvis. Yehia’s health steadily declines, yet at every turn, officials refuse to assist him, actively denying the very existence of the bullet.

Ultimately it is Tarek, the principled doctor tending to Yehia’s case, who must decide whether to follow protocol as he has always done, or to disobey the law and risk his career to operate on Yehia and save his life.

Written with dark, subtle humor, The Queue describes the sinister nature of authoritarianism, and illuminates the way that absolute authority manipulates information, mobilizes others in service to it, and fails to uphold the rights of even those faithful to it.

“The Queue...has drawn comparisons to Western classics like George Orwell’s 1984 and The Trial by Franz Kafka. It represents a new wave of dystopian and surrealist fiction from Middle Eastern writers who are grappling with the chaotic aftermath and stinging disappointments of the Arab Spring.”—The New York Times

“An effective critique of authoritarianism...People...will always find a way to control other people in one way or another, should it suit them. Perhaps with the publication of The Queue, the lesson will begin to finally sink in.” —NPR

“Full of mysterious and troubling detail...Abdel Aziz delivers a striking portrait of an authority that claims all power while rejecting all responsibility, that forces people to hear and speak untruths and to embrace their own oppression.”—The Nation

“Basma Abdel Aziz’s novel is not simply an exegesis on the state of her homeland, but a much more universal evocation of the relationships between hegemonic power and grassroots dissent. It feels both fitting and faintly tragic that she had to resort to the literature of dark fantasy to convey it.” —Toronto Globe and Mail

“Although this is a novel, if you follow events in today’s Egypt, it’s not far from the truth. A brave effort.” —New York Post

"The Queue was written before the military coup that pub Abdel Fattah al-Sisi in power, but it has proved prophetic...This is a study of totalitarian logic with the plainness of a Kafka parable.”—Harper's

“Abdel Aziz illustrates how life in an authoritarian state is normalized not just by the government, but by the people.”—Think Progress

“Offers a window into how the revolution failed...underlining, above all, the solidarities and divisions oppression creates, even as it allows for the stories of people who are otherwise often overlooked to be told...[The Queue] points to the errors in thinking that make change impossible.” —Music & Literature

“Weird and wild...a Kafkaesque tale of a modern Egypt.” —BookRiot

“Equal parts dystopia, satire, and allegory...A distinctly Egyptian version of its Orwellian counterpart, much more real and all the more absurd for it...The nature of truth, its official invocations, its power and its danger, lies at the heart of this work.”—Los Angeles Review of Books

“[Abdel Aziz] brings her careful observations of power, pain and Egyptian society to a remarkable debut.”—Qantara

“An Orwellian tale about life in a Middle Eastern country after a series of unsuccessful protests.” —Men's Journal

“[A] trenchant political fantasy...Mahfouz meets Orwell, with a particularly interesting look at the lives of Egyptian women from a variety of class backgrounds." —The Forward

“One of the most exciting post-Revolution novels written in Egypt.” —The New Inquiry

“The sense of total repression that people feel from authoritative states is chillingly detailed...It seems hugely significant...that it’s a woman who has written this book, dared to point her finger in the eyes of authority in spite of what...are very genuine threats to her own well-being.”—Counterpunch

“The Queue is the world we live in without letting ourselves to know it...the most chilling aspect of this novel is how normal it all feels...” —Okayafrica

“Captures a sense of futility and meaninglessness...Aziz ultimately suggests the worst while leaving the smallest space for hopeful interpretation, a fitting metaphor for Egypt after the Arab Spring.” —Publishers Weekly

“[The Queue] skillfully paints the image of an authority with the power to turn human beings into indistinguishable copies of one another. Written with satire, the novel moves between dystopia and reality—or a world that seems like reality. With her first novel, Abdel Aziz has clearly secured an important position on the map of contemporary literature in the Arab world.” —Al-Mogaz

“Abdel Aziz creates a world parallel to the one in which we live, one where the characters reveal to us the nature of human beings and the choices they make in life.” —Al-Itihad

BASMA ABDEL AZIZ is an Egyptian writer, psychiatrist, and visual artist. Early on, she earned the nickname ‘the rebel’ for her indefatigable struggle against injustice, torture, and corruption. A weekly columnist for Egypt’s al-Shorouk newspaper, she represents a fresh and necessary female voice in Arabic journalism and fiction. She is the winner of the Sawiris Cultural Award, the General Organisation for Cultural Palaces award, and the Ahmed Bahaa-Eddin Award. She lives in Cairo.