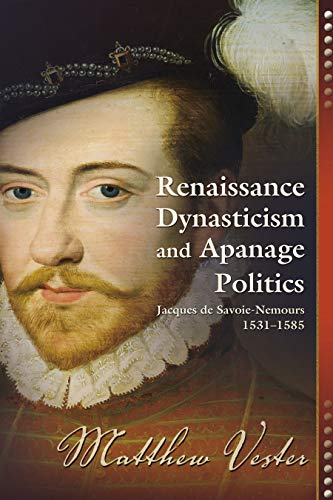 One of the most brilliant courtiers and military leaders in Renaissance France, Jacques de Savoie, duke of Nemours, was head of the cadet branch of the house of Savoy, a dynasty that had ruled over a collection of lands in the Western Alps since the eleventh century. Jacques’ cousin Emanuel Filibert, duke of Savoy and ruler of the Sabaudian lands, fought against Jacques, and each expanded their influence at the other’s expense, while also benefitting from the other’s position. This study examines the complex and rich relationship of the noble cousins that spanned the battlefields, bedchambers, courts, and backrooms of taverns from Paris to Turin to the frontiers between the Genevois and Geneva. Each prince played key roles in sixteenth-century European politics due to their individual and dynastic identities. Jacques’ apanage of the Genevois was a virtual state-within-a-state, the institutional expression of a simultaneously competitive and cooperative relationship between two branches of a sovereign house. Here Matthew Vester provides a new picture of the nobility and of the European political landscape that moves beyond old views and taps into the unspoken cultural rules governing dynastic relations.

Matthew Vester grew up in Virginia Beach, VA, attended university in Washington DC, and received his graduate training at the University of Virginia and UCLA. He taught at Southern Illinois University and is now a member of the History Department at West Virginia University. He and his wife Annastella have two children.