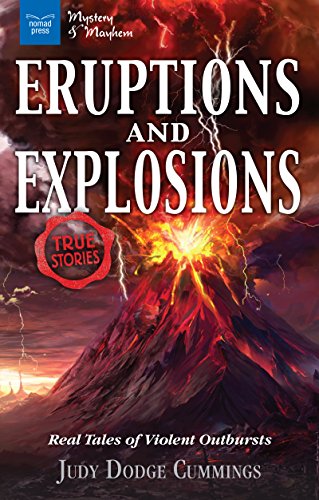 Descrizione libro Nomad Press, United States, 2018. Hardback. Condizione: New. Language: English. Brand new Book. The energy released when volcanoes erupt, engines combust, or bombs explode both thrills and fascinates people. But this power also kills. Eruptions and Explosions: Real Tales of Violent Outbursts recounts the history of five blowups that continued to rattle the world long after the smoke had cleared and embers cooled. For example, in 1815, a mountain in Indonesia called Tambora erupted. This volcano unleashed a monstrous cloud of ash and gas into the upper atmosphere. For three years, the cloud played with the global environment, causing never-ending winters and famine that killed thousands. Some of the world's most devastating explosions cannot be blamed on nature, but on human failings. In 1865, the steamship Sultana exploded while transporting thousands of federal soldiers just freed from Confederate prisoner of war camps. The greatest maritime disaster in United States history was caused as much by greed as a faulty boiler. A discussion about explosions wouldn't be complete without mention of nuclear bombs. A desire to end the bloodshed of World War II led the United States to drop an atomic bomb on Hiroshima, Japan, in 1945. The bomb hastened the end of war, but also killed hundreds of thousands of Japanese civilians and launched the nuclear age. This nuclear age brought a catastrophic explosion at a power plant in the former USSR in 1986. When a reactor blew at a facility in Chernobyl, radioactive fallout spread throughout Europe, creating a contamination zone unfit for human life for centuries. Powerful forces lie within the Earth and people who try to extract that power pay a high price. In 2010, a series of errors led the Macondo oil well to rupture. For three months, millions of barrels of oil gushed into the Gulf of Mexico, destroying plant and animal life and devastating the economy of the region. This is the eighth book in a series called Mystery & Mayhem, which features true tales that whet kids' appetites for history by engaging them in genres with proven track records--mystery and adventure. History is made of near misses, unexplained disappearances, unsolved mysteries, and bizarre events that are almost too weird to be true--almost! The Mystery and Mayhem series delves into these tidbits of history to provide kids with a jumping-off point into a lifelong habit of appreciating history. The five true tales told within Eruptions and Explosions are paired with maps, photographs, and timelines that lend authenticity and narrative texture to the stories. A glossary and resources page provide the opportunity to practice using essential academic tools. These nonfiction narratives use clear, concise language with compelling plots that both avid and reluctant readers will be drawn to. Codice articolo FLT9781619306295