Articoli correlati a The Best Science Fiction & Fantasy of the Year:...

The Best Science Fiction & Fantasy of the Year: 8

The Best Science Fiction & Fantasy of the Year: 8 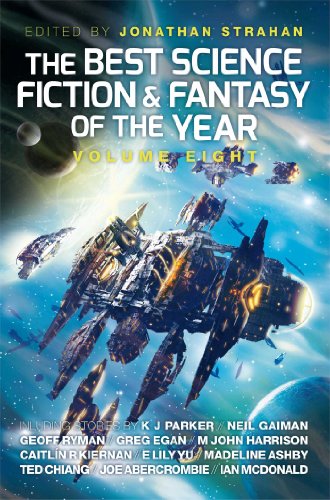 The best of the year's Science Fiction and Fantasy stories as selected by the multiple award-winning editor Jonathan Strahan. The series moves to its new publishing home, Solaris, with this eighth annual volume of the celebrated and popular series.

The best, most original and brightest science fiction and fantasy stories from around the globe from the past twelve months are brought together in one collection by multiple award winning editor Jonathan Strahan. This highly popular series now reaches volume eight and will include stories from both the biggest names in the field and the most exciting new talents.

With this volume the series comes to a new home at Solaris, publishers of Jonathan Strahan’s award-winning original Infinities SF anthologies and the and Fearsome fantasy anthologies.

Jonathan Strahan is a multiple award-winning editor and anthologist. He is also the reviews editor of Locus. He lives in Perth, Western Australia with his wife and their two daughters. He publishes two continuing original anthology series with Solaris, the Infinity and Fearsome books.