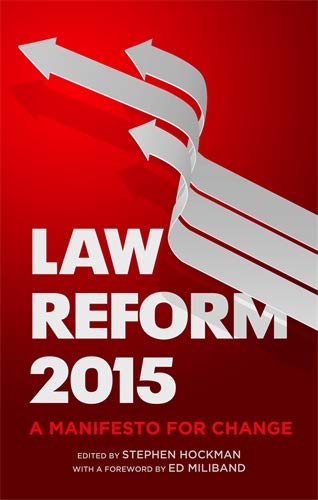 The law cannot stand still - it has to adapt to the changing world we live in. Debate about law reform is therefore critical in an open, democratic society. It helps us to understand the legal rights that underpin our society, and it also has a bearing on efforts to bring about social change and build a just society. These topical essays on key areas of the law highlight the urgency of this debate. As well as reviewing the fitness for purpose of our legal system, they argue powerfully for a radical programme of law reform, reflecting in the process the spirit of Britain's political battles in the lead-up to the 2015 general election. Crucially, if Labour wins in 2015 it will inherit a pared-down civil legal aid scheme. Restricted access to justice is therefore a recurrent theme, as is public disquiet over the erosion of citizens' constitutional rights and the way inequalities have been exacerbated by the coalition government's policies. This wide-ranging book also addresses employment and family law, planning and housebuilding, serious fraud, company law and financial regulation, NHS law and policy, public procurement, child abuse, human rights, personal injury and policing. Fifty years after Harold Wilson's Labour government of 1964-70 established the Law Commission, the authors of this study - all leading practitioners and experts in their fields - once again bring the law reform debate into sharp focus. This is their persuasive manifesto for what they believe a new Labour government could and should do.

Stephen Hockman QC has been a barrister since 1970 and specialises in regulatory law. He is head of chambers at 6 Pump Court, Temple, and a former chair of the Bar Council. He has been a member of the Labour Party and of the Society of Labour Lawyers since his early years in practice.