Articoli correlati a A short history of the Italian Renaissance

Cox, Virginia A short history of the Italian Renaissance

A short history of the Italian Renaissance 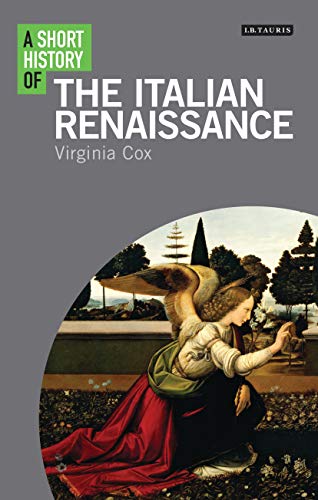 The extraordinary creative energy of Renaissance Italy lies at the root of modern Western culture. In her elegant new introduction, Virginia Cox offers a fresh vision of this iconic moment in European cultural history, when - between the fourteenth and sixteenth centuries - Italy led the world in painting, building, science and literature. Her book explores key artistic, literary and intellectual developments, but also histories of food and fashion, map-making, exploration and anatomy. Alongside towering figures such as Leonardo da Vinci, Michelangelo, Raphael, Petrarch, Machiavelli and Isabella d'Este, Cox reveals a cast of lesser-known protagonists including printers, travel writers, actresses, courtesans, explorers, inventors and even celebrity chefs. At the same time, Italy's rich regional diversity is emphasised; in addition to the great artistic capitals of Florence, Rome and Venice, smaller but cutting-edge centres such as Ferrara, Mantua, Bologna, Urbino and Siena are given their due.
As the author demonstrates, women played a far more prominent role in this exhilarating resurgence than was recognized until very recently - both as patrons of art and literature and as creative artists themselves. 'Renaissance woman', she boldly argues, is as important a legacy as 'Renaissance man'.

'Virginia Cox's short history of the Italian Renaissance is an exemplary introduction - concise, lucid, elegant, balanced, perceptive and accessible. It summarizes traditional views of the Renaissance, especially Jacob Burckhardt's, criticizes them, and offers a revised interpretation of the movement. Cox's Renaissance is, in her own words, "broader and deeper" than its predecessors. She places more emphasis than usual on the coexistence and conflict between different ideas and styles. She re-interprets Burckhardt's idea of Renaissance "individualism" with the aid of recent work on social psychology. Her book includes discussions of the applied arts, notably fashion, as well as a chapter on "the Renaissance woman", based on the author's own research. Students will be grateful for this book, general readers will enjoy it, and fellow-scholars will be appreciative of the knowledge and thought underlying its apparently effortless production.' --
Peter Burke, FBA, Emeritus Professor of Cultural History, University of Cambridge, author of The Italian Renaissance

'This is a short and pithy book by an outstanding scholar at the top of her game. Prioritizing literature, it uses newly-discovered or unfamiliar writings to re-describe social classes, as well as topics like individualism and gender. Its innovative chapters on "Renaissance Man" and - especially - "Renaissance Woman" help to reset the agenda for understanding the Italian Renaissance, making this book an invaluable twenty-first-century guide, not only for students but for the rest of us as well.' --
Alison Brown, Emerita Professor of Italian Renaissance History, Royal Holloway, University of London, author of The Renaissance

Virginia Cox s creative, original, and well-argued study of the Italian Renaissance should be on the bookshelf of every reader interested in the period. Cox gives attention not only to classical scholarship and those who practised it, but also to those who used it in their everyday lives. She presents short, judiciously chosen case studies that illuminate Renaissance art-making and collecting. And she writes with an expert hand about what it was like to live as a man or woman in the Renaissance, again by limiting her focus to exemplary cases that illuminate much larger realities. This short volume should be a go-to book for scholars teaching courses in the Renaissance as well as for general readers who want an introduction to the period that wears its considerable scholarship lightly. The writing throughout is crisp and elegant, with not a wasted word in sight.
Christopher S Celenza, Charles Homer Haskins Professor of Classics and German and Romance Languages and Literatures, Johns Hopkins University, author of Machiavelli: A Portrait and The Lost Italian Renaissance: Humanists, Historians, and Latin s Legacy

'Virginia Cox's rich, thought-provoking and elegantly written introduction to the Italian Renaissance conceives the cultural movement widely and inclusively, and encourages us to see it in new ways. Cox shows how it was rooted in an emulative and endlessly inventive dialogue with the models of ancient Rome and Greece that responded to, and was made more urgent by, the new needs of expanding cities and commerce. The cultural production that she considers includes of course literature, fine art, music and thought, but also material culture (including cooking and fashion), geography and science. Cox argues convincingly that the Renaissance in Italy should be seen as lasting until as late as the start of the seventeenth century, and as multipolar, with important developments emerging as much from princely courts as from the republics of Florence and Venice. Her approach enables her to go beyond the cultures of the social elites to study those of the literate urban classes in general. Perhaps most strikingly, she can devote equal space to Renaissance man - merchants, courtiers and artists in a broad sense - and to Renaissance woman, the secular and religious figures whose engagement with culture flourished most fully towards the end of the period. This finely judged book achieves much more than one might expect from a short history. It should be read and pondered by anyone interested in the Italian Renaissance, whether they are experienced scholars, students or non-specialists.' --
- Brian Richardson, Emeritus Professor of Italian Language, University of Leeds, author of Manuscript Culture in Renaissance Italy

Virginia Cox is Professor of Italian at New York University. She is the author of The Prodigious Muse: Women's Writing in Counter-Reformation Italy, Women's Writing in Italy, 1400-1650 and The Renaissance Dialogue: Literary Dialogue in its Social and Political Contexts, Castiglione to Galileo.